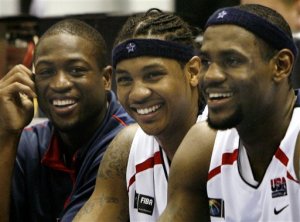 The United State’s Olympic Basketball team was announced today for the 2008 Olympics in China. The one glaring weakness of the team is the lack of size as the only true power forwards/centers on the team are Chris Bosh, Dwight Howard, and Carlos Boozer. Those three big men are joined by Kobe Bryant, LeBron James, Carmelo Anthony, Deron Williams, Chris Paul, Jason Kidd, Michael Redd, Dwayne Wade, and Tayshaun Prince. Many other teams in the world such as Greece, Spain, and Russia all boast big men with excellent skill. If Bosh, Howard, and Boozer get into foul trouble and are unable to play many minutes, then other teams will use their size advantage to pull down rebounds and dominate the offensive glass. Anthony is supposed to start at power forward and play major minutes there, but I don’t expect him to be able to grab rebounds and fight for position in the paint like true power forwards. With FIBA International Rules giving players only five fouls before they foul out (unlike six in the NBA) and counting a technical foul as a personal foul, the US may have major problems with foul trouble.

If the US does manage to keep opposing players off of the offensive boards and to keep their big men out of foul trouble, they should be in good shape. With superstars Kobe Bryant and LeBron James starting at the 2 and 3 positio

ns respectively, the offensive firepower of the team is unbelievable. Jason Kidd is supposedly going to start at the point. Not a bad choice, but I’d rather see Chris Paul or Deron Williams running the offense. Paul and Williams led their teams to the playoffs this year while Kidd only dragged his team down. Whoever is at point, if the US is allowed to play their type of game, look for some high-flying, fast-paced action.

The United States also has the ability to toss a phenomenal defensive lineup on the floor. Bryant and James can both play excellent defense. Toss in Tayshaun Prince and Carlos Boozer and maybe Chris Paul at the point, this line up is capable of stopping anyone. If you want a bigger defensive lineup, you can take out either LeBron or Kobe and place either Dwight Howard or Chris Bosh in their place. If you want to get even bigger, take out both LeBron and Kobe and put both Howard and Bosh into the game. As long as the team stays out of foul trouble, the line ups that coach Mike Krzyzewski can place on the floor are endless. Speaking of Coach K, will his choice of only three big men be the downfall of the team? Will he be able to bring the gold medal back to the United States? The superstars are all ready to go and the roster is power-packed. I expect this team to play well together, to follow the Celtics example of individual sacrifice for a greater goal (speaking of the Celtics, where is Finals’ MVP Paul Pierce? I know he missed some Las Vegas practice sessions, but he is one of the top players in the NBA. How can you leave him off the team?) and to return to the States wearing gold around their necks.