The San Antonio Spurs’ season came to an end yesterday

with a 106-93 defeat at the hands of the Dallas Mavericks. The Mavericks, the 6-seed in the series, took four of the five games to win the best-of-seven series and advance to the second round of the NBA Playoffs.

Here’s my question: How did the Spurs let this happen?

How did a team with Tim Duncan and Tony Parker fall so easily. Duncan and Parker were thought to be two of the best players in the league but this pitiful defeat shows otherwise. If you have a point guard and a big man of that caliber, you shouldn’t lose in the first round, especially playing a Mavericks team that just isn’t very good.

Tony Parker averaged 28.6 points per game, 6.8 assists per game, and shot 54.6% from the field. However, he also averaged 4.2 turnovers per game and mad just 3 of 14 3-pointers throughout the series. Turnovers are the most critical aspect of a basketball game, because they swing momentum. Those 4+ turnovers per game cost the Spurs more than just the 2 points the other team gets. They cost them the 10-2 run the Mavericks go on, because of the momentum they gain from those turnovers. Obviously, that run doesn’t always occur, but a lot of the time it does and it can be traced directly back to Parker.

Duncan, on the other hand, averaged 19.8 points per game, 8.0 rebounds per game, and shot 53.2% from the field. He turned the ball over only 1.4 times per game, but shot 60.7% percent from the foul line (17 of 28). One of the best big men in the game, Duncan has to score more than 19 a game and certainly has to grab more than eight rebounds. There are big men all across the league who are considered much worse than Duncan (Kendrick Perkins, Joakim Noah, Lamar Odom, Zaza Pachulia to name a few) that are snagging more boards than Duncan.

The worst part of all for the Spurs, in Game 3, their coach gave up on their starters. Duncan and Parker, amongst others, headed to the bench in the 3rd quarter and didn’t r 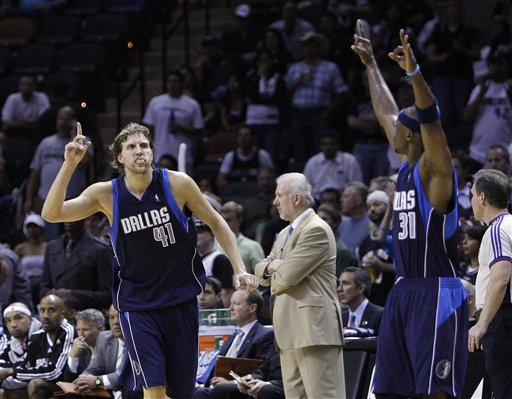 eturn. Duncan played just 16 minutes in the game and had 4 points. The team was thoroughly dominated not just in Game 3, but throughout the entire series.

Well, the Spurs run of dominance is certainly over. Even with Manu Ginobli, who San Antonio desperately needed, this team was a sinking ship. Duncan is washed up. He proved that his best days are behind him and I still can’t figure out why Tony Parker isn’t a better player. He has the skill. Why does he keep turning it over so much? You’re a great point guard. Keep the ball. Either way, the Spurs have some rebuilding to do and it needs to start this offseason by blowing apart the core. Duncan and Parker? Ship them off. Grab some good draft picks and build from there. This team is done. It’s time for a fresh start.