A WSJ/NBC News poll today is out with what is at first a surprising result. They find that when people are asked whether they have a positive or negative view of their own party, Thirty-two percent of non-Tea Party Republicans respond in the negative while only 21% of Tea Party Republicans do so: 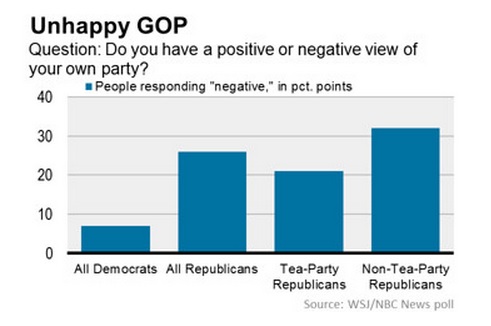 This can be seen clearly in the same WSJ/NBC News poll when it asks about compromising on a budget deal. Here are the results: 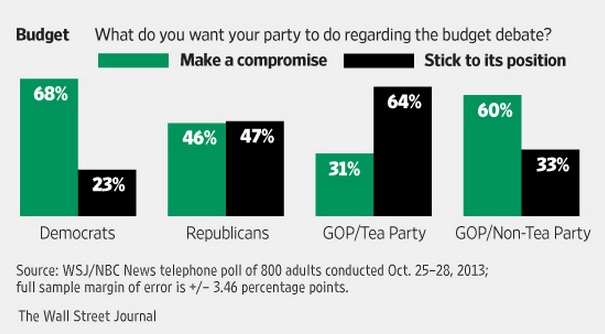 Non-Tea Partiers want to make a budget deal by an overwhelming amount while the Tea Party wants the party to stick to its position by an even greater amount. Overall, the party is split. Guess what? The Tea Party wins. We certainly aren’t getting a big budget deal. At most it will be a small compromise and even that is unlikely. Polling for immigration reform shows a similar split where the Tea Party is against a path to citizenship while the rest of the party is open to it. There too, the Tea Party’s preferences have become the Republican Party line.

There is a belief amongst liberals that not just are Republicans rooting for Obamacare’s failure, but they are actively trying to make it happen. The argument was put forward today by Todd Putnam in Politico. He argues that a big reason why Obamacare has had such a rough first month is “calculated sabotage by Republicans at every step.” He proceeds to run through a number of reasons demonstrating this, but most of his piece does not provide evidence of actual sabotage. Instead, it simply proves that Republicans have done everything in their power to not help the law.

Sabotage is a loaded word. It means that the Republican party is taking an action to deliberately interfere with and disrupt Obamacare to ensure its failure. It’s actively undermining the law. That’s a serious charge. Republicans have long argued that Obamacare will fail because it’s a bad law. They have not argued that it will fail because they will make it fail. So, when liberals claim that Republicans are sabotaging Obamacare, it’s important to determine the veracity of those claims. And they simply don’t pass the smell test.

Out of these six claims, two of them are legitimate claims of sabotage. Republicans not dedicating the already approved funds to HHS and overloading hospitals with queries were both actions deliberately taken to undermine the law. Those are sabotage efforts.

But the remaining four pieces of evidence are not. They simply are Republicans refusing to buy into the law whatsoever. Not allowing fixes to Obamacare certainly makes it worse, but as Democrats have said repeatedly, Obamacare is the law of the land. Republicans have no obligation to pass legislation to improve it. In addition, just because the architects of the law envisioned all states setting up their own exchanges doesn’t mean that they all have to. That was a choice that the states had. By choosing to let the federal government do it, these states are making a legal decision.

The refusal to expand Medicaid, on the other hand, was not part of the law’s original intent, but the Supreme Court opened up that possibility and states have every right to do so. Once again, this is not sabotage. It is simply Republican states refusing to help the law in any way. The same is true about educating their constituents. Republicans are under no obligation to do that as well.

If Republicans bought into the law and pushed for its success, it would certainly work better. There would be less stress on the federal government and more people would be covered thanks to the Medicaid expansion. There would be less confusion about the law and more people would know how to navigate the exchanges. But Republicans – and states in general – are not required to support everything the federal government does. States have their own rights for a reason.

The other side of this is that Republicans are taking a huge risk by vehemently opposing the law. If it does succeed, they will have a lot of questions to answer as to why they refused to help set it up. States who didn’t expand their Medicaid programs will feel increasing pressure to do so. This opposition to Obamacare is a high-risk, high-reward strategy. If the law fails, Republicans will reap massive political and electoral benefits. If it succeeds, the opposite will be true. That gives Republicans even greater incentive to root for the law’s failure. However, don’t confuse that for sabotage. There is an important difference between state’s using their own agency to make political and policy choices and actions done deliberately to undermine the law.

Greg Sargent has a smart post today that steps back from the current Obamacare fights and looks at what happens to the GOP if the law succeeds:

All of which is to say, again, that all that really matters in the long run is whether the policy works.

Republicans will have spent weeks expressing outrage on behalf of Americans who have been unable to tap into the benefits of Obamacare because of administration incompetence, and on behalf of people who are “losing” coverage because of outrageous liberal Big Government overreach. At that point, though, the web site will be working, and untold numbers of people will be shopping for real, tangible plans. Many on the individual market will find plans that are better, and potentially even cheaper overall — whether because of subsidies, or because the plans don’t disguise their true long term cost, as the current, crappy ones do – than their previous ones. None of this is a given, obviously; again, it all turns on whether the law works.

But if it does, what is the Republican argument at that point? Continue to push for full repeal, which would wipe away the benefits that these Americans — the very same people Republicans were professing to speak for in expressing outrage over the web site — are now enjoying?

This problem has always existed for the GOP. They have spent the past three years doing everything they possibly could to stop Obamacare. They took it to the Supreme Court. They made it the focal point of the 2012 election. They risked an international financial crisis, shutdown the government and sent their poll numbers to historic lows, all in the name of blocking Obamacare. It’s been more than a policy goal for Republicans. It’s been everything the party has worked for since the law passed.

Think about it. Why did Cruz & Co. shut down the government over Obamacare? Because they thought it was their last chance to stop the law. There has always been a contradiction here though. If they thought the law was going to fail so badly, why not just wait until it took effect and then use it to win elections? After all, if it was going to be such a disaster, surely that would reap political benefits for the GOP. The problem is, they argued, that once the law takes effect, it will be tough to stop. Whether or not it succeeds on policy grounds, it will succeed politically as it grows a new base of support. This is the GOP position. The law is going to fail, but it will still be a political success so we must do everything in our power to stop it before it takes effect.

If the Republicans are right about this, then their last hope is that HealthCare.gov fails. Otherwise, no matter if Obamacare succeeds or fails on policy grounds, it will succeed politically. At least that was the reasoning behind the entire shutdown. In addition, it is still likely that the administration gets the exchange up and running in time so that Americans can purchase health insurance on it. If Republicans believe that too, then they have already lost. The law will take effect January 1st and it will be impossible to stop due to the political support behind it.

This is what is so incoherent about their argument. Based on their actions, the Republican Party expects Obamacare to succeed politically and fail on policy-grounds. But no matter what, that’s a failing political argument. Yet, at the same time, they are pushing that argument harder than ever by vehemently denouncing Obamacare’s “rate shock” and plan cancellations. They expect the law to succeed politically, but are hoping that they’re wrong. The contradictions within this strategy seem to multiply by the day and the overarching theme is one of desperation. Cruz & Co. are so worried about the law’s political success that they are frantically trying to secure a base of opposition to it. But if they are right that the law will succeed politically, then their current tactics are only going to make the political backlash that much worse.