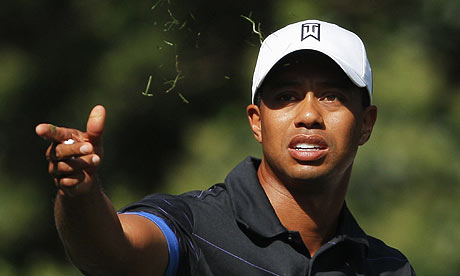 The 3rd roundof the Masters concluded today with Tiger Mania continuing throughout the day. Woods entered the round tied for 19th at just two under par and yet the entire golf world stayed focused on him. Isn’t that too much focus on Tiger?

Everyone keeps wondering whether Tiger can come back from 4… 5… 6… now 7 strokes down. Yes, he did it two weeks ago, but that wasn’t the Masters and that wasn’t against the same competition as the Masters. No offense to Sean O’Hair, but I would not expect Angel Cabrera, Kenny Perry, or Jim Furyk to give up such a large lead.

Speaking of Sean O’Hair. Did you know that O’Hairis tied with Tiger at -4 after the 3rd round? He is one of eight other players tied with Tiger. You probably knew that Phil Mickelson was at 4 under as well. but I’m guessing you couldn’t name any of those 7 other guys. That’s because CBS, ESPN, and the rest of the sports world don’t care about the players tied for 10th place.

Unless one of those players is Tiger.

The man may be the greatest golfer of all time, but until he reaches within 3 of the leader, let’s talk about the leader instead of Woods. Avid golf fans care about the sport, not just Tiger. Let’s talk about the improbable run of 48-year-old Kenny Perry, who is trying to become the oldest major champion ever. Or Angel Cabrera’s attempt to prove that he is not a one-hit-wonder? How about the fact that two South Africans are in the Top 10 (Rory Sabbatini and Tim Clark)? Or Anthony Kim being tied for 10th in just his 1st Master END_OF_DOCUMENT_TOKEN_TO_BE_REPLACED