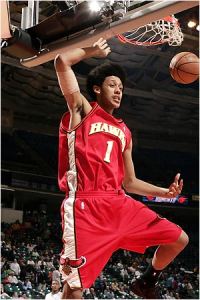 Yesterday, Josh Childress became the fifth NBA player this year to dart from the pros in America and cross the water to Europe. Now a former Atlanta Hawk, Childress was a restricted free agent, meaning the Hawks could match any offer by another NBA team. Unfortunately for Atlanta, Childress signed with Olympiakos, a Greek team, so they do not have the chance to match the offer. That means Childress is gone. The deal with Olympiakos was worth $20 million over three years. Childress is a very good sixth-man and a great energy guy off the bench for the Hawks, but I don’t think he is worth more than six million dollars a year.

So Olympiakos overpaid, but that isn’t exactly newsworthy in sports. What is newsworthy is that a key NBA player chose to play in an inferior league overseas instead of the NBA. It has even been reported that the Hawks were offering Childress a deal worth around $36 million. If Childress was getting a solid deal from Atlanta, then why did he choose to leave the NBA. As I said above, this seems to be a growing theme amongst NBA players as Childress is the fifth, and most notable, player to leave the NBA for a European league this year. END_OF_DOCUMENT_TOKEN_TO_BE_REPLACED