As promised, I stayed off WordPress and Twitter yesterday and enjoyed watching the election without frantically typing up blog posts. But, now that it’s been a bit, I’m back.

There are a huge number of story lines from yesterday’s results. One main one has been about the state of the Republican party. This has come up with a couple of my conservative friends. The party right now is a mix of center-right moderates and extreme Tea Party members. They are held together by a dislike for President Obama, but the ties are tenuous.

Now comes this from the Tea Party Patriots:

The Tea Party Patriots declared war on the Republican establishment after moderate establishment Republican Mitt Romney’s loss to President Barack Obama on Tuesday.Jenny Beth Martin, National Coordinator of Tea Party Patriots, criticized the Republican Party for hand-picking a Beltway elite candidate who did not campaign forcefully on America’s founding principles and said the “presidential loss is unequivocally on them.”

“For those of us who believe that America, as founded, is the greatest country in the history of the world – a ‘Shining city upon a hill’ – we wanted someone who would fight for us,” Martin said. “We wanted a fighter like Ronald Reagan who boldly championed America’s founding principles, who inspired millions of independents and ‘Reagan Democrats’ to join us, and who fought his leftist opponents on the idea that America, as founded, was a ‘Shining city upon a hill.

Instead, Martin lamented, “what we got was a weak moderate candidate, hand-picked by the Beltway elites and country-club establishment wing of the Republican Party.”

Many of the commenters on the article want to form their own “Tea Party” or “Constitutional Party” to break off from the Republican establishment.

I’m wondering how Republican leaders will treat this. I hesitantly think they may jump for joy. Here’s a perfect way to move towards the center, to become more open to Hispanics and more liberal on social issues. The Tea Party is extreme on all those issues. Just by having them jump ship, the Republican party becomes a lot more appealing to minorities and women.

Of course, that leaves a hole in the GOP base. But if the Tea Party runs a candidate in the next election (or in a Senate race, House race, etc.), he won’t have a chance. The Tea Party does not have bipartisan support and America cannot sustain a third party.

In such a situation though, whoever the Republican candidate is will have a chance and the Tea Party members may switch their votes from their own guy to the Republican at the last second to prevent a Democrat victory. In addition, if the Republicans can pick up a decent percentage of minorities and women, the party won’t be as stuck to its base.

It’s certainly a risky strategy, but it’s also a great opportunity. In the end, Republicans may just say, “Bring on the war.”

Under 30 hours until the first polls close so it’s time to lock in my predictions: 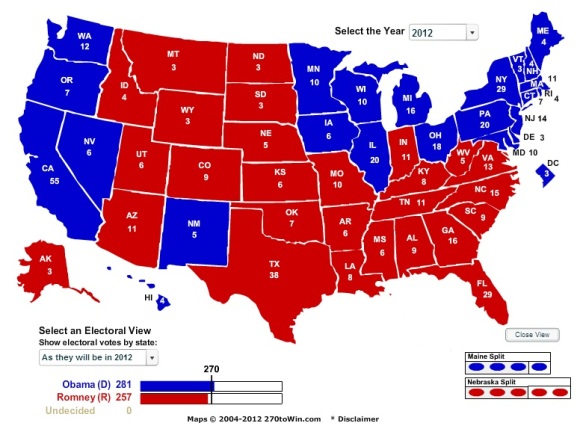 As you can see, I’m expecting a slight Obama victory. However, I’m also of the mind that Obama will likely win. The states I’m most iffy on are Virginia and Colorado, both of which Obama currently leads in slightly according to Real Clear Politics, and I’m giving to Romney. Both have been historically slightly Republican leaning and I’m going with my gut here that they’ll both end up going Republican again. However, if I’m wrong, Obama’s victory will only be stronger.

I don’t see any way Romney takes Ohio based on the current polling, or Pennsylvania, Wisconsin or Michigan for that matter. Iowa and Nevada are a bit closer and if Romney can snag both, we could end up in an electoral college tie. But that would require a large change from the current polling so the odds of that are very low.

On a separate note, I’ll be off the blog and probably Twitter tomorrow. Hopefully four years from now I’ll be a journalist somewhere frantically covering the election. That certainly sounds fun but for this election, I’m going to allow myself some breathing space to nervously enjoy watching it without quickly typing away on my phone and laptop.

The final debate came and went last night and if you follow me on my twitter, you saw absolutely nothing from me on it. Why? A couple of reasons:

First off, I had the luxury of watching with my class of students with none other than Karl Rove. He debated Howard Dean earlier during the day at Duke and stuck around to watch the debate with us. Of course, we were all focused on the actual debate but it was still very cool to be sitting just a few feet away from him during it.

But, plenty of my classmates were on Twitter during it and Rove was as well. I chose to stay off because I wanted to judge it without the nonsense of Twitter. I thought last night was particularly partisan. The first debate Romney clearly won in a landslide. Obama won the second by a little. But throughout last night’s debate and afterwards, any Democrat or left-leaning journalist I follow seemed to think Obama dominated and any Republican or right-leaning journalist thought Romney dominated. It was split decisively along party lines. It was quickly clear to me that I wasn’t going to get much from reading Twitter and I certainly wasn’t going to add anything to the discussion as well. So I stayed away and I’m glad I did so. It actually felt kind of nice to watch the debate away from social media (mostly – I snuck a peek every once in a while).

President Obama and Mitt Romney during their third and final presidential debate.

As for my thoughts on the debate, I thought it was a dead draw. Obama responded well on Israel/Iran while Romney seemed to do better on China (something that infuriates me – more on that later). I thought the rest of the issues were about even. The polling after the debate seemed to show a Obama victory, but remember my way of judging the debates: the winner is the person who convinces voters to vote for him.

Here are the snap polls:

Are you more or less likely to vote for President Obama?

Are you more or less likely to vote for Governor Romney?

Some numbers point towards Obama, some towards Romney and my gut reaction was a tie. Thus, I’m going to call it a tie until I see further polling. We (and by we, I mean Nate Silver) will have plenty of polls to sort through during the next two weeks. (Image via)