Last week, I argued that the Federal Reserve had not made a communication error when it announced in its June FOMC statement that it would begin tapering later in the year if the economy continued to improve at a moderate pace. The problem was that the market did not listen to the Fed correctly. The Fed’s non-taper was not to correct a miscommunication. It was to correct the market’s misreading of that statement. That’s not to say that the Fed’s policies have been optimal. On the contrary, while the Fed did not make a mistake in its communication strategy, its’ making an even worse one in tapering prematurely.

When Ben Bernanke announced that the Fed was going to start a new round of quantitative easing (QE3), the unemployment rate stood at 8.1%. Today, it’s down to 7.3%, but this overstates the extent to which the economy has improved in that time. In particular, workers have dropped out of the labor market at an alarming rate, causing the unemployment rate to drop for the wrong reasons. Some of those workers are baby boomers retiring, but many more are simply people who are so discouraged that they give up looking for a job.

A better indicator of the state of the labor market is the employment-to-population ratio: 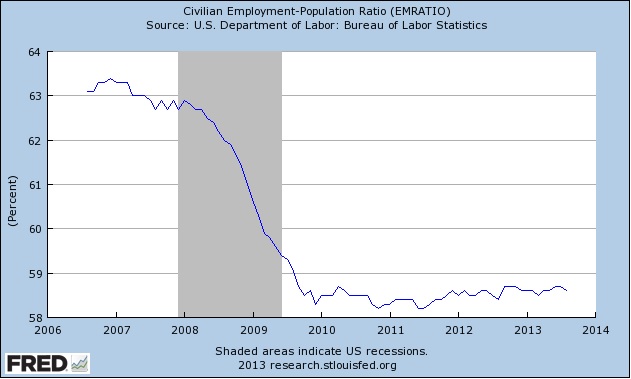 .
As you can see, the employment-to-population ratio crashed during the Great Recession as millions of workers lost their jobs. Since then, the economy has muddled along. It’s unlikely that we’ll return to a ratio of 63-64% anytime soon, because as the country gets older, we will have fewer working-age Americans. Nevertheless, the current rate of 58.6% is unacceptable. In June, the rate was 58.7%. Before that, the economy was certainly not growing at a quick enough pace for the Fed to begin reducing its pace of bond-buying.

Bernanke should have announced that the Fed would continue its asset purchases until the economy showed substantial, consistent improvement. He should’ve said that the Fed always follows the unemployment rate closely, but would track a number of economic indicators. It would continue its unconventional monetary policy until either inflation began creeping upwards or the economy returned to full employment. In a perfect world, the Fed should implement NGDP targeting, but given that such a policy is not happening anytime soon, the Fed should focus on using its current unconventional policy to provide support for the economy. That means not reducing the rate of asset purchases when the economy is barely improving.

Except that is exactly what the Fed intends to do. That was what Bernanke announced in June. Unfortunately, economic growth over the past three months has been below the Fed’s forecast so it adjusted its policy and delayed tapering. But when the economy does improve more and the Fed decides to taper, it will make a big mistake. The Fed could correct its policy and decide to continue its bond-buying for a longer period of time until the economy grows stronger. But that would be an entirely different message than the one Bernanke delivered in June. Then, the miscommunication criticism would ring true.

However, there are no signs that this will be the case. Everything Bernanke said at this past press conference indicates that the Fed is ready to begin tapering once the economy grows at a slightly faster rate. It’s not a mistake of miscommunication. It’s a policy mistake. And since it’s going to hurt economic growth and weaken an already weak labor market, that’s a much worse mistake to make.

In a surprising move today, the Federal Reserve announced that it was not going to taper its bond-buying program. The Fed has been purchasing $85 billion worth of assets every month – $40 billion of mortgage-backed securities and $45 billion of long-term Treasuries. For months now, investors and journalists had expected the Fed to begin to decrease those amounts in today’s Federal Open Market Committee (FOMC) announcement. At 2 pm when the September FOMC statement came out, everyone was proven wrong:

The stock market, bonds and gold all soared on the news of continued easy money while the dollar crashed. Why was everyone so sure that the Fed was prepared to taper today? It all goes back to the June FOMC meeting when Chairman Ben Bernanke first hinted at tapering. The Fed also upgraded its economic forecasts and in the press conference, Bernanke repeatedly emphasized the improvement in the labor market.

“If the incoming data are broadly consistent with this forecast, the Committee currently anticipates that it would be appropriate to moderate the monthly pace of purchases later this year,” Bernanke said. “And if the subsequent data remain broadly aligned with our current expectations for the economy, we would continue to reduce the pace of purchases in measured steps through the first half of next year, ending purchases around mid-year.”

Interest rates on the 10-year Treasury note skyrocketed while stocks and gold both fell. The market took it all to mean that easy money was coming to an end soon.

Except that wasn’t what Bernanke or the Fed was trying to say. They were trying to say that if economic data continues to come in positively, then the Fed will scale back its bond-buying program. But only if the economic data is good. From the June FOMC Statement:

The Committee will closely monitor incoming information on economic and financial developments in coming months. The Committee will continue its purchases of Treasury and agency mortgage-backed securities, and employ its other policy tools as appropriate, until the outlook for the labor market has improved substantially in a context of price stability. The Committee is prepared to increase or reduce the pace of its purchases to maintain appropriate policy accommodation as the outlook for the labor market or inflation changes.

If you read it literally, that statement clearly indicates that the Fed will react to labor market conditions in determining whether or not to taper. But the market parses every single word Bernanke says and it soon became conventional wisdom that a taper was coming. Dallas Fed Bank President Richard Fisher and Minnesota Fed President Narayana Kocherlakota both tried to walk back Bernanke’s statement and assert that a taper was not necessarily coming.

But today, the Fed proved everyone wrong who parsed the statement and everyone right who read it literally. Subsequent jobs reports have been underwhelming, the Fed reduced its economic forecast today and the federal government is threatening to blow up the economy. If you listened to all of Bernanke’s comments and read the FOMC statement without overthinking it, you wouldn’t have been surprised by today’s announcement. The Fed said it would only begin tapering if the underlying economic data improved. But it worsened so the Fed shouldn’t have been expected to reduce its bond-buying. Yet, journalists and investors alike assumed that the Fed was still set on tapering, despite the underwhelming economic data.

With its announcement, the Fed was not trying to correct anything Bernanke said. It was trying to correct the market’s blind reading of the Fed’s statements. “Don’t just read that we’re going to taper. Read the caveats as well and take them into account.” Markets had assumed that when Bernanke mentioned tapering, it was set in stone that it would begin today. They did not believe for a second that poor economic data could delay it. Despite attempts to walk back Bernanke’s comments, the Fed could not credibly convince investors that it was not necessarily going to taper in September. By surprising the market and adjusting its policy based on labor market conditions, the Fed regained its credibility today.

Larry Summers is out of the running for chairman of the Federal Reserve after he notified the President yesterday “that any possible confirmation process for me would be acrimonious and would not serve the interests of the Federal Reserve, the Administration, or ultimately, the interests of the nation’s ongoing economic recovery.” Summers is right here. After Jon Tester (D-MT) announced Friday that he would vote against Summers in the Senate Banking Committee, it became clear that his confirmation process would be extremely difficult. His decision to bow out saves an ugly intraparty fight between the Administration and Senate Democrats. It was a fight that the President should’ve won, but wasn’t going to and Summers knew it.

To start, Obama should’ve nominated current Fed Vice-Chair Janet Yellen from the beginning. It should’ve been an easy decision. But the President loves Summers and was seemingly set on choosing him from the start. It wasn’t the optimal choice, but Summers would still have made an excellent Fed Chair. This is what makes it so absurd that Tester and other liberal Democrats were going to vote against him. 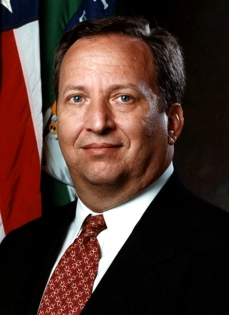 Summers is, by all accounts, a brilliant economist. However, many liberals were wary of his prominent role in the repeal of Glass-Steagall and the deregulation of the derivatives market in the late ’90s. There’s no question that Summers was a leader in making those decisions, but Summers has also learned from them. He supports banks holding greater levels of capital, one of the focal points of Dodd-Frank. In addition, there’s not much information on Yellen’s regulatory beliefs. She’s an economist by trade, not a regulator. But skeptics of Summers inherently believe that she would be a tougher regulator than him. As Josh Barro pointed out on Twitter last night though, if Republicans thought that was true of Summers, they would’ve supported him as well. But that hasn’t happened either. The fact is that Summer would in all likelihood have implemented Dodd-Frank in a similar manner to how Yellen would.

Other arguments against Summers is that the nomination of an elite Democrat would politicize the Fed too much. But this argument is overblown. The Fed is already a politicized institution and nominating Yellen over Summers wouldn’t change that.

One of the least covered areas of this debate has been Yellen and Summers views on monetary policy. Yellen is considered more of a dove, but only slightly more. Markets perceive a larger difference between the two than may actually exist.

Finally, Yellen’s proponents argue that Obama has done a poor job appointing women to economic positions. This is true, but it’s not a strong enough reason to oppose Summers.

For all those reasons, Yellen is a better choice. But she’s only slightly better. Summers would still likely do an excellent job as Federal Reserve chairman. Both candidates should have had no problem receiving Democratic support. Instead, liberal Democrats jumped on this as a chance to fight the President. But why? This really does weaken Obama: he can’t even get his own party to support an extremely strong candidate in Summers. Does he have any sway on Capitol Hill at all? It’s increasingly looking like he doesn’t. This perceived weakness hurts not just Obama, but Democrats as a whole in trying to pass other legislation. A weak President is bad news the Democratic party.

This is why it was absurd for Democrats to vote against Summers. They may get a slightly better Fed Chair in Yellen (or maybe a worse one, if Obama nominates someone else) in return for showing that the President doesn’t even have sway in his own party. Does that sound like a smart move for Democratic senators and the Democratic party? It sure doesn’t to me.