The Canucks scored on the ensuing two-man advantage and eventually scored twice on Marchand’s idiotic play. Vancouver’s other goal? It came on another terrible call when Tyler Seguin was whistled for tripping a Canuck player. In fact, Seguin had tapped the Canuck on the ankle slightly, nothing more. However, this Canucks’ goal only evened up the officiating as the Bruins were gifted a goal themselves after a non-icing call (which as clearly icing) caused Vancouver to relax and when the refs didn’t blow the whistle, Boston took advantage. END_OF_DOCUMENT_TOKEN_TO_BE_REPLACED 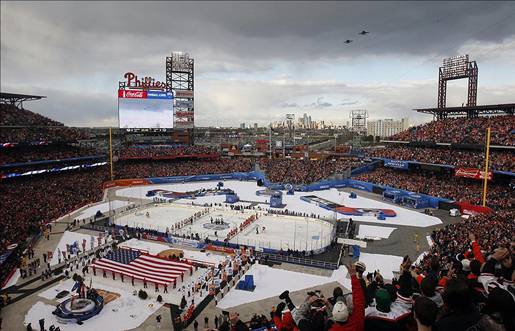 The fifth edition of the NHL’s Winter Classic may have been its best yet as the Philadelphia Flyers took on the New York Rangers in the league’s annual outdoor game at Citizen’s Bank Park in Philadelphia. While the game time had to be pushed back two hours because of the weather, the players were ready to go as soon as the puck dropped.

Both teams came out of the gate flying with back and forth action throughout the entire first period that ended scoreless, despite good chances from each team. The period was very physical, with both teams looking to leave their mark on each other.  Throughout HBO’s “24/7: Flyers/Rangers” documentary, an inside look at both teams, the anticipation for this game was building. Players made it clear on the show that there was no love lost between the two of them and it didn’t disappoint.

Just over half way through the second period, the Flyers got on the board with Brayden Schenn recording his first career goal off a bad rebound from Rangers goalie Henrik Lundqvist. Less than two minutes later, Claude Giroux doubled the lead with his 18th goal of the year and Philadelphia seemed to be in control. But just 30 seconds later, Mike Rupp cut the lead to one again and celebrated with a Jaromir-Jagr esque salute that drew the ire of many Flyer players.

Unfortunately for Philly, Rupp wasn’t done celebrating as just over two minutes into the third period, he snuck a shot past Flyers goalie Sergei Bobrovsky that he should have handled easily. Just a few minutes later, the Rangers big offseason signing Brad Richards broke the tie with his 14th goal of the year. A horrendous penalty call on the Rangers in final minutes of the game gave the Flyers an undeserved chance to tie up the game, but they couldn’t capitalize on it. END_OF_DOCUMENT_TOKEN_TO_BE_REPLACED

It just keeps getting worse and worse up in Montreal as P.K. Subban and Tomas Plekanec fought during practice today in yet another embarrassing moment for the team. After a 1-5 road trip, the Habs have just 35 points in 39 games, last in the Northeast Division and third to last in the Eastern Conference.

The Canadiens have been going through a rough stretch recently. For the first time in their existence, Montreal didn’t win a Stanley Cup during a decade when they failed to capture the title from 2000-2010. Their overtime loss in game seven last year to the eventual Stanley Cup champion Boston Bruins marked the 18th consecutive year that Les Bleu-Blanc-Rouge went home empty handed. And it has not gone over well with their rabid fan base.

The Habs didn’t do much in the offseason with their biggest move being the signing of forward Erik Cole. Nevertheless, expectations remain high up in Montreal.

Then the season began. The Habs won just one of their first eight games, getting out scored by eight goals during the stretch. Things improved slightly over the next month, including a home-and-home of sweep against the Boston Bruins. But that has just fueled Boston into an incredible stretch that has seen them skyrocket to the top of the NHL standings while Montreal has continued to struggle. END_OF_DOCUMENT_TOKEN_TO_BE_REPLACED