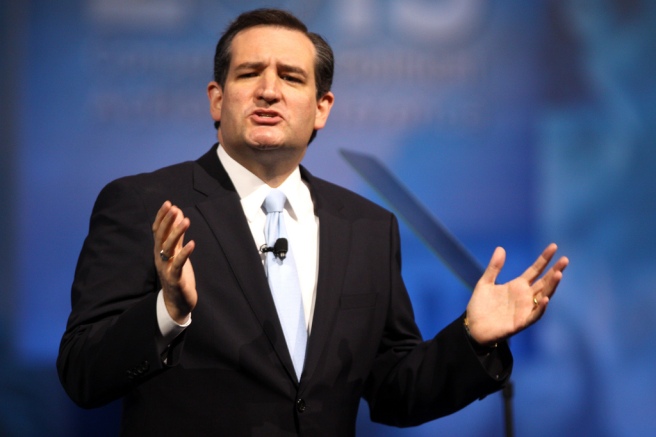 As you’ve no doubt heard, Senator Ted Cruz (R-TX) is performing a pre-arraigned filibuster (I’m going to call it a filibuster) against the House passed continuing resolution that defunds Obamacare. Cruz has no chance of stopping the actual bill from moving forward since Republicans are not going to vote against cloture (allowing debate on the bill to proceed) and Majority Leader Harry Reid (D-NV) will strip the defunding language from it in an amendment that only needs 51 votes to pass (can’t be filibustered). Cruz’s filibuster here is entirely a political stunt. But that’s part of what makes it so impressive.

Many conservatives today are upset that the mainstream media isn’t paying as much attention to Cruz as it did to Wendy Davis’s filibuster in the Texas State Senate in June. As you may remember, Davis’s filibuster was futile too. She was able to run out the clock on that legislative session, but soon after, Governor Rick Perry (R-TX) called for another special legislative session and the bill passed anyways. Davis was soon a national liberal hero and is considering running for governor.

Here’s the thing: Cruz’s filibuster is more impressive than Davis’s.

Both Cruz and Davis were standing up for something they believed in, though they knew they were doomed to fail. They had grassroots supports and were entirely committed to their goals. However, Davis had the backing of the Democratic establishment and her Democratic colleagues. She didn’t risk alienating her fellow Democrats. On the contrary, it was certain to make her a national sensation.

The same is not true of Cruz. Before he began his filibuster, his Republican colleagues pleaded with him not to waste time and talk all night. They told him that doing so was give the House basically no time to pass a CR once the bill got back to them. It would hurt the party politically. Those senators have a point. That may happen, but Cruz ignored them anyways.

He’s also alienating Republican donors, something he’ll need if he runs for president in 2016. Those donors see Cruz’s filibuster as a cheap, parliamentary trick that accomplishes nothing and eventually puts the House in a tight stop.

And despite all of that opposition – from the Republican establishment, Republican leadership and Republican donors – Cruz decided to filibuster the bill. He decided to risk alienating those key supporters to demonstrate his opposition to Obamacare. Say what you will about Cruz doing so just to gain political points, but he’s also risking a lot. He was already adored by the base. If he hadn’t performed this filibuster, the Tea Party may have been disappointed in him, but they wouldn’t have turned on him. He could’ve talked for a couple of hours, yielded the floor and allowed the vote on cloture to proceed. It wouldn’t have angered McConnell and donors and it would have made his point.But he decided to talk all night.

The base is going to LOVE this and rightfully so. Cruz really is bucking the establishment to stand up for what he believes in. Because of that, it’s unclear if his filibuster helps his presidential ambitions. It’s certainly not a good policy move. Liberals fell in love with Wendy Davis, but she never had to choose between siding with her colleagues and donors or standing up for what she believed in. Cruz had that choice and he chose to stick by his principles. He deserves credit for that.