For years now, Oakland Athletics’ general manager Billy Beane has been hailed the king of GMs, but is he worthy of this title? The Athletics have a resolute philosophy of developing talent in their farm system and not wasting money on over-priced free agents. Beane brought this system to the A’s and it seemed to work, but as A’s fans look back over the last decade, how much success has this philosophy really brought them? Since Beane took over in 1997, Oakland has won a total of one playoff series. If the goal was to reach and win a World Series, then Beane has certainly come up short. That’s not to say Beane’s strategy did not pay dividends. From 2000-2004, the Athletics won at least 91 games every season and made the playoffs four out of those five years. They lost in the first round every one of those years, but nonetheless, they made the playoffs. They developed strong starting pitching from their farm system and they used every inning out of those young arms. Tim Hudson, Mark Mulder, and Barry Zito are three of the most notable pitchers to come through the A’s system and subsequently be traded away as their free agency approached. Beane knew he could not compete with teams like the New York Yankees and Boston Red Sox, who have nearly unlimited funds. Thus he did the smart thing and traded his pitchers away right before they hit the open market. He wasn’t going to be able to sign them, but by trading them, at least he got something in return.

The A’s used this strategy with position players too as Jason Giambi, Miguel Tejeda, and Johnny Damon all began their careers with Oakland. Now a new crop of young pitchers has come through and subsequently been traded away. Dan Haren was traded before the 2008 season while in the past two weeks, Oakland traded away their number one and two starters, Rich Harden and Joe Blanton. From 2000-2004, the Athletics were able to use their great farm system to continue bringing up new talent so they did not have to fork over outrageous amounts of money for their other players. They were able to trade Hudson, Mulder, and Zito knowing that they had Harden, Haren, and Blanton coming up, but they don’t seem to have much left in the minors. The rest of the league has caught on to this philosophy and it is creating some problems for Beane. Other teams are scouting and drafting much better which is preventing Beane from getting every player he wants. The Athletics’ minor league system is not nearly as good as it used to be. Now that the rest of the league has converted to Beane’s philosophy, does it still work? The A’s missed their chance at World Series titles from 2000-2004 and it may be a while until another legitimate opportunity presents itself.

Now the Athletics aren’t exactly knee-deep in cash. For 2008, they have the third lowest payroll of all major league teams. With so little money to work with, I would expect the Athletics to lose a lot of games. The problem is that the two teams with lower payrolls then the Athletics are the Tampa Bay Rays and Florida Marlins, who are a combined 21 games over .500. If those two teams can win games with less money than the A’s, then certainly 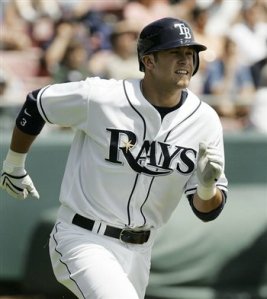 the king of GMs, Billy Beane, can craft a team to win as well. Beane has done so as his team entered the day 7 games over .500 and just 4.5 games out of the Wild Card. The problem? The Athletics have shipped out their top two pitchers, effectively forfeiting the rest of their season. With their farm system weak and the rest of league quickly catching up with drafting, Beane may have traded away Oakland’s last shot at the playoffs for many years. “Beane Ball” isn’t going to work in Oakland anymore and it is time for Billy Beaneto look at Tampa and look at Florida and realize that he needs to switch strategy. The Rays and Marlins build up players at multiple positions and get them ready for one major year. The Marlins have Hanley Ramirez, Dan Uggla, and others who all reached the big leagues at approximately the same time so Florida could afford them all and contend in the NL East. The Rays have Evan Longoria, Scott Kazmir, and others who are all making minimum money, but have superstar talent. Beane is trading a winning team away. He is taking a solid team, selling off the parts, and leaving just the bare minimum pieces. Athletics’ fans used to trust Beane no matter what, but times are changing and their support is waning so my message to Billy Beane is to find a new strategy, a new philosophy with which to win, because the old one simply ain’t working anymore.

One thought on “Does Money Ball Work?”