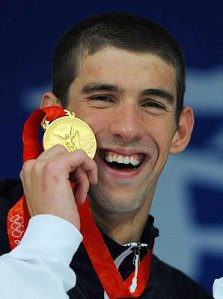 Michael Phelps completed the unthinkable last night, winning eight gold medals in a single Olympics to surpass Mark Spitz’s 36-year-old record of seven gold medals in one games. Phelps swam 17 races, won 8 gold medals, and set seven world records. He won one of the closest races of all-time, when he snuck in front of Milorad Cavic at the last moment to beat Cavic by .01 seconds. He watched Jason Lezak complete on the greatest comebacks in swimming history to keep Phelps’s hopes of eight gold medals alive. He has secured the title of Greatest Olympian of all-time. Some are even asking if he is the greatest athlete ever. Phelps’s accomplishments at this Olympics go past the unreal, past dreamland, and into the absolutely unimaginable.

Only Mark Spitz knows what Michael Phelps is going through. When you swimming 17 races at full speed in 10 days, conduct countless interviews, and get mobbed by fans everywhere you go, life must very tiring. Phelps pushed through though. He carried a smile at all times, except before races when he walked out headphones in his ears and a stern, concentrated look on his face. He may need a couple weeks off before getting in the pool again, but I don’t think so. With someone like Michael Phelps, he lives for he water and no amount of pain is going to keep him away from that liquid bliss. Will he back in 2012? Yes. Now I can’t say that for certain, but I cannot imagine a situation other than injury that would keep Phelps away from the 2012 games. 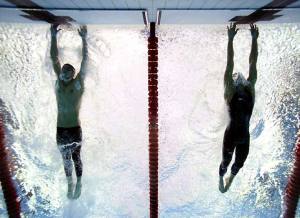 With Phelps’s magical record out of the way, what is left for the Olympics and what is left for swimming? I wasn’t alive when Spitz won his seven gold medals, but I’m sure most people were calling him the greatest Olympian ever and saying that his record will never be broken. Phelps said that he “wants to be the first Michael Phelps and not the second Mark Spitz”. Sorry Michael, but you are the second Mark Spitz. The second of two to win seven gold medals in one Olympics. And do you know what? There will be a second Michael Phelps and a third Mark Spitz.

As Phelps said, records are made to be broken. He competed in 8 different events so that he could break Spitz’s record. Well, the next great swimmer will swim nine, win nine, and forever be called the Greatest Olympian Ever. Until the next one comes along. Phelps has taken us on a magical ride into a fairytale, but the story has not ended. It has only just begun. Who the next main character is we don’t know. Maybe Phelps returns in all of his glory in 2012 to win 11 golds. I’ll take the under on that, but you never know. The one thing I do know is that though Michael Phelps’s mark is astonishing, some young swimmer, who probably isn’t even alive yet, will set his sights on breaking that mark and eventually, he will.