The sequester officially takes effect tomorrow and there has been almost zero negotiations between the White House and Republican leaders over avoiding the cuts. Instead, both sides have spent most of their energy blaming the other side. The media has done an excellent job covering this aspect of the sequester, but it has ignored another major part of it: market reaction.

Remember, the sequester was enacted in the summer of 2011 when Republicans took the debt ceiling hostage and we almost defaulted on our debts. In the immediate aftermath of the deal, investors were happy that the U.S. Congress had avoided creating an artificial economic crisis. However, part of that optimism stemmed from the sequester. If the Super Committee failed (as it eventually did), then Congress would have to find a way to either replace the sequester or accept the sledge-hammer cuts. For a while now, a number of serious people on Wall Street have been calling for deficit reduction. I don’t agree with their analysis, but that’s what many people on Wall Street want.

So, is it any surprise that as we get closer to the sequester taking effect, the market has soared? Here’s the Dow Jones over the past three months:

Now, there’s a lot of other factors in there, such as the Fiscal Cliff deal and the recent mess in Italy. But look at the steep rise at the end. That’s in the last few days even as Italy cannot form a government and the Eurozone looks to be moving towards another crisis. At the same time, everyone in the U.S. wants to avoid the sequester, but we cannot agree to a deal so all these cuts that no one wants are going to be implemented tomorrow. Look at the market reaction over the past few days: 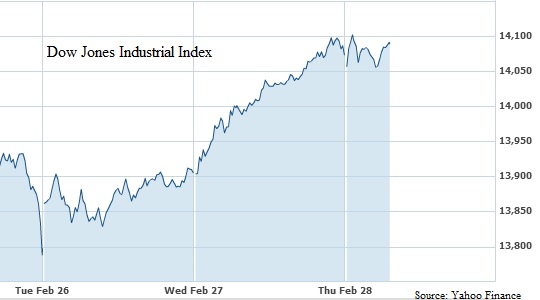 Does that look like the market is panicking about the sequester? Not at all. No one wants these cuts, our government is too dysfunctional to even negotiate over them and yet the Dow has almost reached a new high. Why?

One possible reason may be other factors. Fourth quarter GDP was revised upwards today and unemployment claims came in below expectations. But none of that explains the previous two days rising market. Of course, it is always tough to pin down a reason for why the market does what it does. No one knows for sure. But I’d hypothesize that the sequester hitting is actually reassuring markets.

The government is not just removing the sequester without replacing it. Although I would support such a bill, Wall Street would not. As I said above, Wall Street wants deficit reduction and the sequester cuts spending. It may not do so in a smart way, but it cuts it nonetheless and Wall Street is pleased that we are actually reducing the deficit.

Of course the impacts of the cuts, while unclear, will still hurt the economy and even if Wall Street is hoping the cuts take effect, it’s still bad policy. It also brings up a different question: if we were to just get rid of the sequester, would markets revolt? I’m not sure and it doesn’t look like we’ll ever find out. But it’s a question the media has ignored entirely and deserves more coverage.

29 thoughts on “Does the Market Care About the Sequester?”