It’s been almost two weeks since the D.C. council passed it’s living wage bill and Mayor Vincent Gray will have to decide soon whether to veto the measure. The law would require large retailers – defined as having operating revenues of $1 billion or more and store size of at least 75,000 square feet – to pay their employees a minimum of $12.50 an hour. The current D.C. minimum wage is $8.25/hour. The law is aimed directly at Wal-Mart, which had been planning on opening six stores in the D.C. region, but has since threatened to scrap most of those plans if Gray signs the bill. 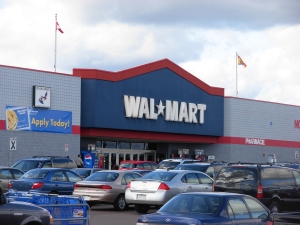 Wal-Mart may cancel its D.C. stores.

He should veto it.

The new stores will bring in 1,800 jobs to the region which still faces high unemployment. While D.C. proper’s unemployment rate is low (PDF), the entire region’s is still at 8.5% (PDF). Those jobs would be very helpful for those unemployed workers. And you should take Wal-Mart’s opposition to the bill seriously. They aren’t bluffing. If Gray signs the bill and Wal-Mart still opens the stores, it will be a sign to every other city in the country to follow a similar tactic. Wal-Mart simply cannot afford to be bluffing here.

So that leaves Gray with two options.

1. Veto the bill and Wal-Mart will open its stores.

On CNN this morning, D.C. council member Vincent Orange justified the law by saying that Wal-Mart’s low wages force the government to pay more in benefits and thus cost taxpayer’s money. But in Orange’s alternate scenario where Wal-Mart doesn’t open the stores in D.C., those 1,800 workers are unemployed and are entirely dependent on the government for food stamps, unemployment benefits, etc. That costs taxpayers more than if Wal-Mart opened its stores.

Now, if the labor market were at full employment, things would be different. Those workers could find jobs elsewhere, but they may be at the minimum wage ($8.25/hour) as well. The government would have to pick up the tab anyways. And if those jobs weren’t at the minimum wage? Well, then Wal-Mart couldn’t hire those workers at $8.25/hour even if there was no law against it. Any worker making more than the minimum wage isn’t going to switch to a minimum wage job at Wal-Mart. The company would soon find itself facing labor shortage when it opened its new stores and would have to offer higher wages anyways.

With unemployment low, the living wage bill causes those 1,800 workers to take jobs at a different firm at either the minimum wage (leaving the government with the same financial responsibilities) or at a higher wage (which would’ve forced Wal-Mart to raise wages anyways).

The choice is clear: Mayor Gray should veto the bill.