Yesterday, MLB suspended Milwaukee Brewers outfielder Ryan Braun for the remainder of the 2013 season for violating MLB’s drug policy. He’s not contesting the penalty so it’ll go into effect immediately. The suspension stems from a list provided by Anthony Bosch, the founder of Biogenesis Lab, that had the names of MLB players who the company sold performance enhancing drugs to. The list also included Alex Rodriguez, Melky Cabrera, Nelson Cruz and other big leaguers. For months now, MLB has been investigating the connection between the players and the lab and rumors have heated up in recent weeks that the players on the list would be facing lengthy suspensions. Braun, like most other players on the list, was not cooperative with the league and refused to comment on the investigation.

This all comes just a couple years after Braun tested positive for a banned substance, but had his suspension overturned thanks to a mistake in the chain of custody in processing his urine sample. He got off on a technicality. 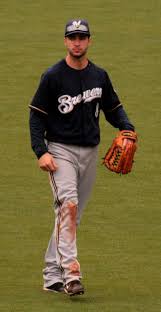 Now, Braun is finally suspended, but the punishment is much more lenient than fits the crime. Of the 65 games he’s suspended for, 50 are for him purchasing PEDs from the Biogenesis Lab and the other 15 are for his actions during the appeal process of his previous failed test.

Braun has lied repeatedly about using PEDs. He tested positive for steroids and then stood in front of the cameras and declared that he never ingested a banned substance. After he got off, he released a statement saying, “I am very pleased and relieved by today’s decision. It is the first step in restoring my good name and reputation. We were able to get through this because I am innocent and the truth is on our side.” What a bunch of BS.

So after all of this, what’s his punishment? A lousy 65 games, the $3.25 million in salary that goes with it and nothing else. He’ll be back for spring training and Opening Day next year, ready to go on as if none of this every happened. Of course, his legacy and career will always be significantly tainted. Buster Olney called him the Lance Armstrong of baseball, a fitting title. But the actual punishment is weak.

The Brewers are terrible this year – so Braun won’t miss out on a pennant race or the playoffs. He’s just taking a long offseason. And the punishment only goes down as his first violation – if it had been his second, it would’ve come with a 100-game ban and a third failed test is a lifetime ban. His decision not to appeal the ban also means that MLB Players Association won’t get involved, which could’ve been really ugly for Braun as the MLBPA was considering not supporting him in his case.

In addition, both MLB and the Players Association released statements commending Braun for taking responsibility for his actions. Taking responsibility?! He cheated, lied and is escaping with missing less than half a season! And his statement on the suspension? He spends more time looking for sympathy than apologizing.

I know MLB wants to get these suspensions over with and move past Biogenesis. It wants to put stories about performance enhancing drugs behind it and focus on the game. I bet A-Rod will work out a deal with the league in the next few days as well. But this isn’t enough. The punishment against Braun is weak.

And it’s not just fans who want a clean league, the players are sick of it as well. They wanted Braun to go down hard, but will surely be disappointed by this outcome. This wasn’t a tough punishment. It was a weak deal to put this episode in the past. And once again, Ryan Braun got off easy.

One thought on “Ryan Braun Got Off Easy”