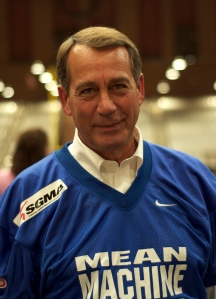 John Boehner has not been a mean machine as speaker.

One of the most common adjectives used to describe Speaker John Boehner (R-OH) is weak. A quick google search will find you numerous examples of different pundits from both sides of the aisle criticizing Boehner for not having control of his caucus. The problem is that all of these pundits are conflating “weakness” with “ineffectiveness.” Boehner is a weak speaker, but that doesn’t make him ineffective. On the contrary, a weak speaker is exactly what Republicans need right now.

To understand this, imagine the counterfactual where Boehner is a strong speaker, ruling his caucus with an iron grip and dealing out strict punishments for breaking ranks within the party. Disloyal members receive crappy committee assignments and no money from the party in their next campaign. How do you imagine this would play out with the far right? Do you think they would fall in line and become loyal soldiers? Of course not! These members believe they were sent to Washington to stop “business as usual.” The more that they buck the party, the more that they believe they are listening to their constituents. Being ostracized from is a great way to attract conservative donors and produces great talking points in a potential primary. These members take great pleasure in defying him and it’s often good politics for them to do so.

This mindset has eliminated all of Boehner’s weapons. That doesn’t mean that he couldn’t have still punished disloyal members, but that would have created an even deeper divide within the GOP. It would’ve openly and publicly pitted Boehner and the House leadership versus a small, but substantial and vocal group of Republican Congressmen. It would have been a mess for the party. FreedomWorks and Club for Growth would almost certainly have sided with the intransigents and Boehner would have likely had to turn to Minority Leader Nancy Pelosi (D-CA) for support to keep his speakership.

That’s what would’ve happened if Boehner attempted to be a strong speaker. The House would have accomplished as little as it has today and budget battles would have been even more intense with a full-out civil war in the Republican party undermining trust and disrupting any negotiations. A battle over who would be speaker would have complicated things as well.

Instead, Boehner has chosen to be weak. It’s pretty clear that Boehner would have failed mightily if he had attempted to be a strong speaker, but that doesn’t mean the choice was easy. The media coverage Boehner has received has been almost universally negative. Being weak has meant being ineffective. But all of that coverage fails to take into account the larger political context that Boehner is working within. Nevertheless, Boehner has accepted it all and continued to balance the crazy demands of hard-line conservatives with the political reality that Americans blame the Republican party for these fiscal crises. On top of that, he knows that each of these crises is damaging the economy and reduces American confidence in their elected officials. It’s an almost impossible situation to deal with, but Boehner has navigated it so far by allowing himself to be weak. Don’t confuse that with him being ineffective and don’t ignore the larger realities of our current political system. It’s unfair to judge him by doing so.