Pew is out with a new poll today that confirms that Sen. Ted Cruz’s #DefundObamacare strategy was viewed favorably by the Tea Party and horribly by all other Republicans. 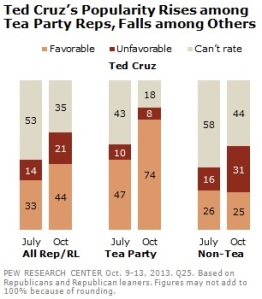 Before the shutdown, 47% of the Tea Party viewed him as favorable, compared with just 10% who didn’t. Not surprising, he’s even more popular now. He’s gone from a +37 favorable to a +66. He’s clearly a Tea Party hero, but he already was a Tea Party hero. He didn’t need to choose a futile strategy, shut the government down, piss off the Republican establishment and surrender without accomplishing anything. Ted Cruz failed mightily, but the Tea Party is very happy with him for putting up the fight.

The rest of Republicans? Not so much. His unfavorables nearly doubled and he went from a +10 to -6 in net favorables. That’s really bad.

So, did Cruz help himself or hurt himself for his 2016 chances?

There are two different schools of thought. One is that he first needs to win the primary and that will require Tea Party support. In that regard, his plan was a huge success. The other school of thought is that he will need money and the backing of the Republican establishment as well. Clearly he has failed there.

The reason that this has been such a disaster for him is that he already was a Tea Party favorite. If he hadn’t gone on this wild goose chase, his favorables wouldn’t have improved, but they probably wouldn’t have fallen either. No one else was going to use this strategy. If the Tea Party reacted negatively to congressional Republicans not using the government budget and debt ceiling to fight Obamacare, they would’ve taken it out evenly on all the 2016 GOP candidates (at least those in Congress). The blame would have been shared equally so it wouldn’t have put Cruz at a disadvantage. There wasn’t much of an upside or downside to not using the #Defund strategy.

On the other hand, there wasn’t much of an upside to using the strategy. Cruz became a Tea Party cult hero, but he already was well-regarded. There’s only so much he can improve. However, there was a large downside. The establishment found out who it doesn’t want in 2016. And that’s Ted Cruz. They hated every bit of this and are not going to forget quickly. These are the people who Cruz needs to fund his campaign and support him. They are also the people that he hadn’t convinced to support him in 2016. After the #Defund plan, they are all but certain to find a different candidate. That trumps any gains he made amongst the Tea Party. It’s a big setback for his 2016 presidential ambitions