It’s been quite a while since I’ve posted here, more than four and a half months actually. It was a very busy spring semester at school and I’m now interning at the Washington Monthly, a political magazine, in Washington D.C. I’m hoping to get to some Nationals games while I’m here, but right now, I’m head deep in politics and policy and enjoying it a lot. However, it also gives me some time to get this blog back going. I’m adjusting my philosophy on posting though. Previously, I tried to write between 300-500 per post, delivering more of my opinions and delving a bit deeper into a topic. But as I read more and more, this just isn’t the best way for a blog to work. One hundred or 200 words is plenty for a blog post. Quoting an article and offering a brief thought is good as well. So while I still put out a lengthier post every once in a while, I’m planning on sticking to short ones for now.

The Associated Press recently examined the drug testing policies of eleven of the 12 SEC schools and what they found probably will surprise some people: testing positive for marijuana really isn’t a big deal at all:

In the most successful league of the BCS-era, players routinely get third, fourth and even fifth chances before they’re booted from the team

If you fail an NCAA drug test, you receive a suspension. But SEC schools are much more lenient:

Currently, a second positive test at Mississippi might simply mean the loss of free tickets for family and/or community service.

Six of the schools have a three-strikes-and-you’re-out method. At Florida, you might get a fifth strike. At Arkansas, four. And Ole Miss doesn’t have a defined number.

Is this really a big deal at all though? In the April 30 issue of ESPN the Magazine, Mark Schlabach detailed it more specifically:

In the NCAA’s latest drug-use survey, conducted in 2009 and released in January, 22.6 percent of athletes admitted to using marijuana in the previous 12 months.

And that number is almost certainly on the low end. I’m sure many players feared that their anonymous answer would become public and ruin their careers. College athletes smoke weed. But it’s more than that. Many college students smoke weed. Now, I’m certainly not going into the legality of marijuana here, but the fact is that college students smoke pot and student athletes are no different. Stringent drug testing would certainly bring down the number of athletes who partake in the activity, but it would also catch many athletes, likely some of those at the top of their revenue-generating sports. Does the NCAA want its best players sitting out a significant period of time for smoking weed? I doubt it so I don’t see stricter enforcement in the future. If anything, I see the opposite. 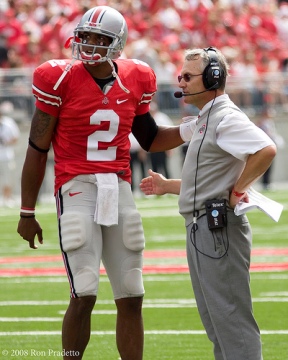 The NCAA announced today that Ohio State will receive a one-year bowl ban, lose nine scholarships over the course of three years and face an additional year of probation. These penalties, while damaging to Ohio State, are not as severe as they could have been. The one-year bowl ban will greatly hurt the university, but this is just another demonstration of the NCAA’s inability to police college athletics.

Who pays most for the indiscretions of Terrelle Pryor and Jim Tressel? The current players at Ohio State. The ones who did nothing wrong.

Now, Pryor had to serve a five-game suspension in the NFL and that was an excellent, bold move by commissioner Roger Goodell. And any school that wishes to hire Tressel in the next five years will have to demonstrate why it needs to employ him. Thus, neither escaped unscathed from the scandal in Columbus, but they are not hit particularly hard as well. Pryor is on the Oakland Raiders roster while Tressel is now a video-review coordinator for the Indianapolis Colts. Certainly, that is not the dream job for either man, but each is making a living and still actively involved in the NFL. END_OF_DOCUMENT_TOKEN_TO_BE_REPLACED

After a lot of news yesterday, today has been much less eventful. Here is a recap of the few stories that made headlines today:

LSU 38, Ohio State 24: The BCS National Championship was eventful though I would not consider it a “close” game. Just like last year’s championship game, Ohio State jumped out on top with a 65-yard touchdown run from Chris “Beanie” Wells to lead 7-0. They added a field goal to that before everything fell apart. After being down 10-3 after the first quarter, the Tigers outscored Ohio State 21-0 in the second quarter to go into half time with a 24-10 lead. Each team added a touchdown in each quarter, but the game was never in doubt. The closest moment came when the Buckeyes had the ball at midfield down 31-17 with 10 minutes left in the 4th quarter. It was 4th down and Ohio State needed 7 yards for a first down and a chance to get back in the game. Unfortunately, LSU hit Buckeye quarterback Todd Boeckman and knocked the ball loose. LSU gained possession at Ohio State’s 30 yard line and effectively ended the game. LSU played a solid game and deserved to win, but do they deserve to be National Champions? It is impossible to answer that question without a better playoff system. Is Georgia or USC better than LSU? Who knows, but LSU looked a like a championship-caliber team Monday night. I have no problem declaring them the 2008 Champions. END_OF_DOCUMENT_TOKEN_TO_BE_REPLACED