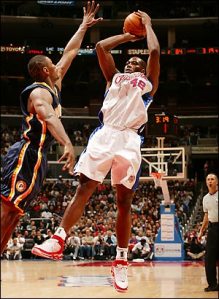 Brand is just one of many big time players who are expected to stay with their team for no apparent reason. Why should superstar players be attached to their particular team? In Brand’s case, it is different, because he had already agreed to a contract with the Clippers. The Clips seemed to have locked up Brand and felt content that they could finally compete in the tough Western Conference. Yet, Brand turned around and signed a lucrative deal with the 76ers. The Clippers weren’t offering maximum money to the big man, something they thought wouldn’t be the breaking point in the deal. They thought they were going to get a hometown discount and be able to keep Brand while also using some extra money to sign Baron Davis. Well they signed Davis, accommodating one of Brand’s wishes: to build a winning team. Now all Brand had to do was sign on the dotted line. Los Angeles wasn’t offering the maximum salary and though Brand seemed okay with that at first, he wasn’t okay with it in the end. So was it fair for Elton Brand to suddenly shock the Clippers and sign with the 76ers? END_OF_DOCUMENT_TOKEN_TO_BE_REPLACED

With the NHL and NBA playoffs complete, it means that both sports are in the midst of their respective off season. Free Agency officially began in the NHL yesterday at noon and begins in the 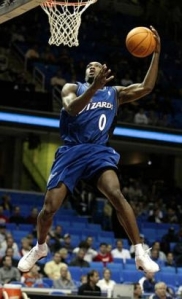 NBA on July 10th. NBA players are currently able to enter into verbal agreements with teams, but may not sign a contract until the 10th. With that said, let’s take a look at some of the big players in the NHL and NBA and where they are likely to wind up.

1. Gilbert Arenas
The former Washington Wizards guard is the premier player on the market this year and is going to bring in some big bucks. The Wizards are certainly looking to keep their All Star point guard as they have reportedly offered him a deal of 6 years for approximately $126 million. Also in the running are the Golden State Warriors, who now have some extra cash lying around after Baron Davis’s sudden departure. The Warriors are offering Arenas a 5 year deal worth 100 million dollars. Arenas seems to be content with the Wizards and the extra year that only the Wizards are able to offer (NBA rules) so I expect him to stay in Washington.

2. Baron Davis
Well I’m going to predict that Davis goes to the Los Angeles Clippers for 5 years and $65 million. So as everyone has heard, Davis verbally agreed to a 5 year, $65 million withtheClippers. Davis surprisingly opted out of his contract with the Golden State Warriors a couple of days ago after they refused to offer him a long-term deal. Averaging 22 points a game last season, Davis is a huge pick up for the other Los Angeles team who now can set their sights on resigning big man Elton Brand, who is up next on this NBA Free Agent list. END_OF_DOCUMENT_TOKEN_TO_BE_REPLACED