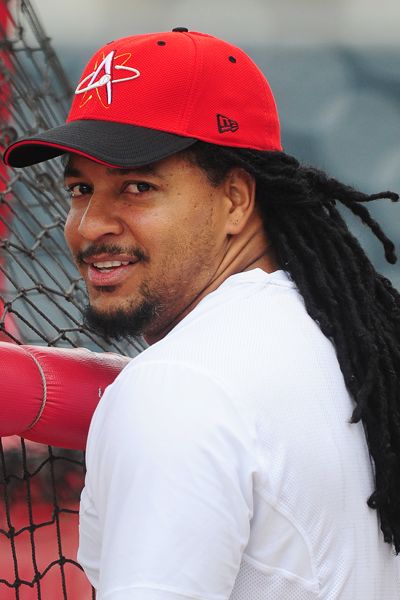 Manny Ramirez is in the midst of a 50-game suspension for violating the league’s drug policy. He can return to the Dodgers on July 3rd when his suspension is done. In the meantime, Manny has been working out and keeping in shape for his return. However, he is now planning on going to Los Angeles’s Triple-A club Albuquerque to play some ball there before returning to the Dodgers’ lineup. How is this fair??

Ramirez is suspended from Major League Baseball. but he can go play in the minors? This makes no sense to me. Manny is suspended from the majors. He shouldn’t be allowed to play. Period. There isn’t any wiggle room there yet mysteriously, he can go play at Triple-A all he wants. That’s not a suspension from baseball. It’s a suspension from MLB. Why didn’t he just spend the whole 50 games down there, playing regular baseball and keeping himself in peak condition? He could have broken every Triple-A record, come back to Dodgers fresh, and have missed nothing. He’d be completely in rhythm.

This rule needs to be fixed immediately. A suspended player is suspended from professional baseball. He can’t go rehab and get himself ready to play. It doesn’t work like that. Manny should have had to work his way back AFTER the suspension ended. It’s common sense yet MLB managed to screw it up. Well done, Bud Selig. END_OF_DOCUMENT_TOKEN_TO_BE_REPLACED

I was recently reading The Yankee Years by Joe Torre and Tom Verducci and I came across this quote:

I was trying to do whatever I could to stay away from Mariano to have him for two innings the next day. Chamberlain got through the seventh with the low pitch count. Now my choice is to go with someone else in the eighth, but if I don’t get a clean inning, then I’ve got to get Mariano up, which was the one thing I was trying to avoid. I guess I never really had enough trust in everybody else down there to think that getting three outs in that spot is so simple

Before dissecting that quotation, let me give some background for you. This was game 3 of the 2007 ALDS where the Yankees were down 2-0 in games to the Cleveland Indians. Entering the 8th inning, New York lead 8-3 and had already used their set-up man Joba Chamberlain in the 7th, throwing 16 pitches. Torre made a critical mistake here by sending Joba back out to the mound to pitch the eighth. Up 5 runs, there was no reason to where Chamberlain’s arm out in a game that was close to out of reach. This wasn’t a two or three run game. It was a five-run game. Using Chamberlain for an inning is fine (especially, considering it was 5-3 at the time), but using him in the eighth was a big mistake. Eventually, Chamberlain faltered in game 4 and the Yanks lost the series. This can all be traced back to Torre’s unwillingness to use the rest of his bullpen. This was not something new in 2007 though. Thinking about Torre’s managerial style, I realized that he has faith in only a couple guys in his bullpen each year. The last sentence in that quote says everything. “I never really had enough trust in everybody else down there”. That’s a big problem over the course of a season and I decided to take a look into Torre’s problem managing his bullpen. END_OF_DOCUMENT_TOKEN_TO_BE_REPLACED

Manny’s steroid use opens up a whole new box of questions, but the biggest one of all deals with a team he’s not on and season five years ago:

Is the 2004 Championship (and 2007 for that matter) he won with the Boston Red Sox tainted?

That’s all pretty straight forward. So far, no player’s steroid use has caused anyone to doubt a team’s success. Keyword: team. Teams win. Players just make up a team and Manny was one player. This shouldn’t even be a debate: The 2004 Boston Red Sox were, are, and forever will be champions.