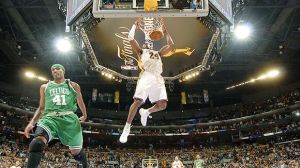 In an up-and-down game which had the Lakers blow a 19-point first half lead, Lakers’ coach Phil Jackson made the necessary moves to propel his team into a season-saving win. Criticized after Game 4 for not playing starting point guard Derek Fisher and power forward Lamar Odom enough in the fourth quarter, Jackson waisted no time inserting Fisher and Odom into the lineup in Game 5 as they played the final 6-plus minutes of the fourth quarter. Odom played 41 minutes, scoring 20 points, making eight of ten shots, and grabbing eleven rebounds. Fisher played 35 minutes and scored 15 points, including making a couple critical free throws down the stretch. While Jackson made the necessary moves to win, the Celtics’ players seemed unable to get the job done.

Kevin Garnett had his worst game of the postseason as he picked up fouls early and was visibly tired throughout the game. The most telling possession for KG during the game occurred with 20 seconds remaining in the game. Down by 5, Eddie House fired up a desperate 3-pointer from the corner, but missed badly as the ball launched off the bottom of the rim and into the air. As Celtic and Laker players madly converged under the ball, Garnett stood at the foul line, watching the scrum and refusing to get involved in the most important rebound of the game. KG played only 33 minutes and during that time played pretty well, scoring 13 points and grabbing 14 rebounds, but he made only 1 of 4 free throws in the final minutes of the game, costing the Celtics valuable points. While Paul Pierce scrapped for a every loose ball and fought furiously against double and triple teams, KG sat on the sideline, reduced to a mere cheerleader. Pierce played the entire game and scored 38 monster points for Boston, including making 16 of 19 free throws.

To be fair to Garnett, he was not the only member of the Big 3 to have an off night. Ray Allen did not have a poor first half, though it was nothing special. However, Allen disappeared in the third and fourth quarters. He had a couple of wide open 3-pointers, but missed badly on all of them. Like the first couple rounds of the playoffs, Allen lacked confidence in his shot and ended up shooting a miserable 4 of 13 from the field, 3 of 8 from 3-point range. Starting point guard Rajon Rondo played only 15 points and never seemed to have any control during the game. He made only 1 of 7 shots and had 3 assists and 2 turnovers. It did not help Boston that starting center Kendrick Perkins was injured and could not play. This forced P.J. Brown to play against Pau Gasol and Lamar Odom who are too strong and too tall for the veteran Brown. Saddled with foul trouble and injured, the Celtics were in trouble down low the entire night so the Celtics should be pretty pleased with only being out-rebounded by 3.

As many Celtic players struggled during the game, Celtics’ coach Doc Rivers could not seem to find the lineup that would give the Celtics the win. Rarely-used guard Tony Allen played significant minutes in the first half and played extremely well. A quick, lengthy player, Allen gave the Celtics the ability to have him guard Kobe Bryant, leaving Paul Pierce to shut down another player. On the offensive end, Tony Allen does not have a great jump shot, but he can easily drive past any of the Laker defenders. In the second quarter, Rivers played Allen as the point guard, a great move in my perspective and the Celtics went on a run while Allen played the point. However, Rivers refused to put Allen back in the lineup during the second half. Even as Rajon Rondo, Eddie House, and Sam Cassell continued to cough the ball up every other possession, Rivers would not put Allen back in the game. The Lakers gained a 14 point lead in the fourth quarter, but the Celtics fought back to tie it. However, some poor offensive possessions down the stretch and timely shots by Kobe and Fisher proved to be the difference as the Lakers staved off elimination and forced a game 6.