If you haven’t been following soccer lately, then you have missed out on some great action:

Euro 2008 is in full swing as the Group Round finishes up tomorrow with two great matches, Russia vs Sweden and Greece vs Spain. Those four teams are in Group D, the fourth of four groups in Euro 2008. Spain has already guaranteed itself a spot in the quarterfinals and Greece has already been eliminated. If Sweden beats or ties Russia tomorrow, they advance, but if Russia w 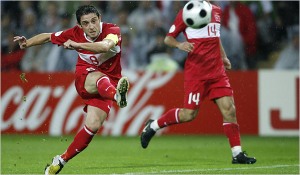 ins, then they move on to the quarterfinals. If you don’t find a do-or-die game like that enticing, then you are not a sports fan.

That is just one of four groups in Euro 2008, though the other three have completed all their matches. In Group A, Portugal and Turkey advanced with 6 points each while Switzerland and the Czech Republic were sent home early. In a similar do-or-die game between the Czech Republic and Turkey earlier this week, Turkey scored 3 goals in the last 15 minutes, including two goals by Nihat Kahveci in the final three minutes of the game, to beat the Czech Republic 3-2 and advance to the quarterfinals. Lead by Christiano Ronaldo, Portugal sailed through the Group Round with easy wins over Turkey and the Czech Republic. In their final game against Switzerland, Portugal sat most of their starters as they had already ensured themselves a spot in the next round. Playing a sub-par team, Switzerland defeated Portugal 2-0 in the game and captured their only victory of the tournament.

Group B was nearly as exciting as Group A with underdog Croatia winning all three of their games to take home the top seed of Group B. In this group, every team had a chance to advance to the next round entering the final day of games. Croatia had already clinched the top seed in the Group so Germany, Austria, and Polan

d were left to fight for the final spot. Germany entered their final match with 3 points while Austria and Poland each had 1 point. With Germany facing Austria in their final game, a German victory would advance them into the next round. Austria needed a victory as well, but if Poland beat Croatia, then both Poland and Austria would have ended with 4 points and the victor would have been decided via a tiebreak. Had Germany and Austria tied and Poland won, both Poland and Germany would have ended with 4 points and a tiebreak would have had to be used again. With so many possibilities, what’s not to love? In the end, Germany took care of business, defeating the Austrians 1-0 on a monstrous free kick by German midfielder Michael Ballack so a tiebreak was not necessary.

And the action continued today with matches in Group C. Like Group B, all four teams entered today’s games with a chance to advance to the next round. The Netherlands have played near perfect soccer so far and have already clinched their spot in the next round. Italy and France have fallen victim to the Netherlands’ fantastic football as each has lost their match to the mighty Dutch. In their other match, Italy and France both squandered an opportunity for a win against Romania, each earning a draw in their respective match. Thus entering the final day of games, the Netherlands sat atop the group with 6 points, Romania was in second with 2 points and Italy and France were bringing up the rear with a point each. Romania needed a victory in their match against the Dutch to advance to the next round. If Romania lost however, then the winner of the Italy/France match-up would advance. If Romania lost and Italy and France tied, then all three teams would have ended Group play with 2 points and a tiebreak would have had to be used. Like Group B, the outcome was not nearly as complicated as it could have been. The Dutch defeated Romania 2-0 and Italy finished off France by the same score so the Netherlands and Italy are on to the quarterfinals.

That is just the last day of matches in group play of Euro 2008. For those that don’t follow Euro closely, the 16 qualifiers for Euro 2008 were placed into 4 Groups. During group play, every team played the three other teams in its group once and the two teams with the most points in each group at the end of group play advanced to the next round.  At this point, a bracket is created as shown below and the rest of the games are single elimination games where the winner moves on and the loser goes home.

Euro 2008 has been unbelievable to watch, but I am still looking forward to the 2010 World Cup which the US is trying to qualify for right now. After playing a couple of friendliesagainst England (loss 2-0), Spain (loss 1-0), and Argentina (draw 0-0), the US began official qualifying for the 2010 World Cup with a 8-0 dismantling of Barbados last Sunday. The United States are in the Concacaf Qualifying Draw which is somewhat confusing to those that do not follow soccer closely so bear with me as I do my best to explain. The Concacaf is open to all North American teams, and is mainly made up of islands in and round the Carribean. Of the 35 teams participating in the Concacaf, only 22 play in the first round. Those 22 are determined by the lowest Fifa Rankings and they are broken up into 11 home and away matches with the winner determined by aggregate score. Those11 winners ae then joined with the 13 other teams into 12 more home and away matches. The winner of those 12 home and away matches (once again determined by aggregate score) are then broken up into three groups of four and group play ensues just like in Euro 2008 above. The top two teams in each group are then put together into a final group 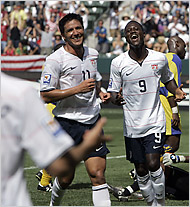 The United States did not have to play in the first round as they are ranked 21st in the world. Their second round match-up, Barbados, defeated Dominica in the first round, but are clearly not at the same level as the US. In the first of the home and away games, the US destroyed Barbados 8-0, including a hat trick by Brian Ching. New manager Bob Bradley has done a fairly good job getting the US ready for action, culminating in a 0-0 draw against number 1 ranked Argentina. As the US plays in the Concacaf and prepares for the 2010 World Cup, American soccer fans are excited for a deep run and some upset victories.

That is my soccer round up that I have been dying to write. For those that follow soccer, good job. For those that don’t, listen to all these great games and the next time you’re watching tv, flip to soccer and watch some great action.