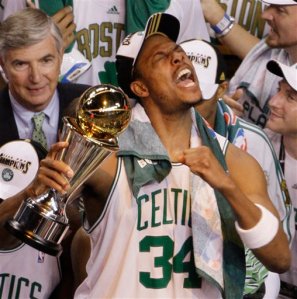 What a night for the Celtics. You could not have imagined a victory more dominant or more emotional than the Celtics’ 131-92 victory over the Los Angeles Lakers yesterday to win the NBA Championship. The Celtics dominated every facet of the game, out-rebounding the Lakers 48 to 29 and forcing 19 turnovers. The Big 3 had their greatest performance of the year. Kevin Garnett returned to regular season form with 26 points and 14 rebounds. Paul Pierce may not have had one of his greatest shooting performance (4 of 13 from the field), but he still ended with 18 points and 10 assists. Ray Allen completed his dominating Finals with 7 three pointers and 26 points, setting an NBA record of 22 three pointers made in an NBA Finals’ series. Rajon Rondo played the best game of his career, taking the ball to the hoop and forcing the Lakers to guard him. He had 21 points (8 of 20 from the field), 7 rebounds, 8 assists, and 6 steals. The Celtics best bench player, James Posey, had 11 points, making all four of his shots including three 3 pointers, 3 rebounds, and 3 steals. That is just on the offensive end.

As the final seconds ticked off the clock in the 2008 NBA season, everyone on the court, in the Garden, and in the NBA had learned a valuable lesson from these NBA Finals: Defense wins championships. The Celtics just overpowered the Lakers defensively and Kobe looked lost the entire series. The Lakers did score 92 points in the game, but that was only with a 32 point fourth quarter when the Celtics were no longer focusing on defense, but rather the seconds remaining in the game. Boston’s defense shined through in the first half where they held the Lakers to 35 points (15 in the second quarter), 30% shooting, and had a halftime lead of 23 points. The rest of the game was just one big party for Boston fans.

A Celtics fan, I’m more than a little biased, but I could not have been much happier for Paul Pierce. He has spent all 10 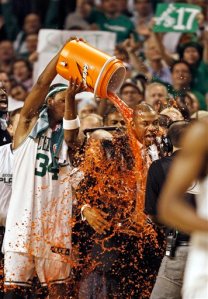 of his years in Boston, struggling for many horrendous seasons, but never giving up on the team. Even as reporters criticized him and refused to admit that he is one of the top ten players in the NBA, Pierce stayed complacent and fought through many losing seasons. Then the Celtics threw away last season in hopes of getting a toppick in the draft, but the lottery did not go in the Celtics favor as they received the worst pick the possibly could have gotten. It was a catastrophe, but Celtic General Manager Danny Ainge made to great trades to acquire Ray Allen and Kevin Garnett. Thus, the Big 3 were formed.

Now, the Big 3 are NBA Champions. The joyous celebration began in the fourth quarter, once the game was safe, and will continue for many months to come. Pierce danced along with the crowd and doused coach Doc Rivers with Gatorade. Players, family members, and Celtic officials swarmed the court in jubilation and fans jumped up and down with glee in the stands. Gino danced on the Garden’s jumbo-tron and Paul Pierce raised his NBA Finals MVP Trophy into the air. Garnett broke down into tears and Ray Allen danced in champagne. For 22 years, the Boston Celtics had been without an NBA Championship, but on June 17th, 2008, the Celtics ended the drought with one of the most dominating victories in NBA Finals’ history and captured the Celtics’ 17th Championship. (Photos: ESPN)