Yesterday the Los Angeles Angels of Anaheim acquired star first baseman Mark Teixeira from the Atlanta Braves for first baseman Casey Kotchman and a minor leaguer. Already possessing the best record in the major leagues, the Angels just got a whole lot better. Their starting pitching is dominant. Ervin Santana, Joe Saunders, and John Lackey may be the best starting pitcher combination in baseball with Jered Weaver and Jon Garland. None of those five starters have an ERA above 4.30, giving the Angels a chance to win every game.

Their bullpen is lights-out. Closer Francisco Rodriguez is on pace to shatter Bobby Thigpen’s record of 57 saves in one season. Relievers Jose Arredondo and Scott Shields both have ERAs of 3.00 or below. Their team ERA is 3.88 and team WHIP is 1.29. The pitching staff is nothing less than superb and it is built for a long run in the postseason. Since only three starters are needed during the playoffs, at least one of Santana, Saunders, and Lackey would be able to pitch in every game

The only hole in the Angels was their hitting. They have an excellent offense to being with, but it is not quite equal to the offenses of the Red Sox or Yankees. That is, until yesterday. Teixeira gives Anaheim everything they’ve been looking for. He is a switch hitting power hit and an RBI machine. He doesn’t have a spectacular batting average, but it is still very good (.283). Coming into yesterday, Vladimir Guerrero lead the Angels with 17 homers, 54 RBI, and a .346 On-Base-Percentage. Now Teixeira leads the team with 20 home runs, 78 RBI, and a .390 OBP. That’s quite an upgrade. On top of that, the Angels didn’t give away any huge part of their team. Kotchman is a very good player, but that is it. He is not as good as Mark Teixeira and likely never will be. 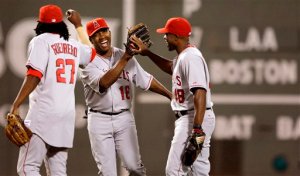 The Angels now have one of the deadliest offenses in baseball. Guerrero and Teixeira are just the start of the team. Add in Torii Hunter, Garret Anderson and speedster Chone Figgins and you have one amazing offense. Howie Kendrick is batting over .330 in over 220 at bats while Erick Aybar is batting .285 in 228 at bats. The team can play long-ball, it can play small-ball. Manager Mike Scioscia knows how to adapt his style to fit his team and he will alter things slightly to make sure Teixeirais the focal point of the Angels’ offense. On a night when John Lackey came two-outs away from no-hitting the Boston Red Sox, the Angels leap frogged the rest of the league and gave themselves the best chance to win the World Series.