On to the the NL West where the competition isn’t exactly as talented as in the NL East and NL Central:

After managing to resign Manny Ramirez, the Dodgers have the talent necessary to win this division. Nothing about this team is particularly special as even with Ramirez, the lineup is not overpowering, and the pitching staff is nothing to brag about. Besides Mannys, Russell Martin and Rafael Furcal lead the offense, which is one of the best in the NL West, though nothing compared to the rest of the league. Chad Billingsley leads the rotation, though he is not an overpowering ace, and he is followed by Hiroki Kuroda and Clayton Kershaw. They may get some outs, but the offense is going to have to carry a large load. In the bullpen, Jonathan Broxton leads a strong relieving core that is one of the reasons I am expecting the Dodgers to win this division.

Led by their strong rotation, the Giants will challenge for the division title, but their offense isn’t strong enough to top Los Angeles. Cy-Young candidate Tim Lincecum, Randy Johnson, and Matt Cain are the top three in this powerful staff that possesses both young enthusiasm and veteran experience. When it comes to getting many innings out of their starters, the Giants will be tops in their division. However, a lineup that has Aaron Rowand in the cleanup spot is going to have a lot of problems scoring runs. The bullpen has star closer Brian Wilson that can finish the tight, low-scoring games that the Giants will need to win if they want to stay competitive with the Dodgers and Diamondbacks. 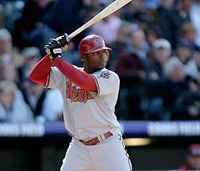 The Diamondbacks have a solid starting rotation and lineup, but unless they acquire another key player, this team will fall just short of the NL West title. The offense is led by Conor Jackson and Mark Reynolds, both of whom put up good numbers last year, but aren’t capable of carrying the offense. Stephen Drew can help a little bit, but overall, this offense isn’t capable of out-hitting many teams. Pitching-wise, Arizona has a great one-two punch in Brandon Webb and Dan Haren. Having those two pitchers alone guarantees that the D-backs will be competitive. However after those two, the rotation is uncertain and the bullpen is mediocre at best. Arizona will have its good stretches during the year, but even in the NL West, they don’t quite have the talent to come out on top.

This year will be a tough year for Colorado Rockies’s fans as  them team does not have the offense nor the pitching to challenge for the NL West crown. When Garret Atkins is your best hitter, you know you’re in trouble. Brad Hawpe and Chris Iannetta both will help Atkins, but Colorado does not have a star player that they will carry the team. The pitching staff is led by Aaron Cook and a bunch of mediocre players (Jorge De La Rosa, Jeff Francis, and Ubaldo Jiminez) after that. Huston Street is a good acquisition to close tight games, but the Rockies are first going to need to get themselves in close games. That could be a challenge in and of itself. If Colorado’s rotation can keep them in ballgames, they might have a shot at the division, but things are going to have to go perfectly.

An aging lineup and a rotation that likely won’t be the same come September are going to leave the Padres as the seller-dwellers. Brian Giles and Adrian Gonzalez led the Padres offensively last year, but they are both a year older and will likely not put up the production that they had. Even if they do hit as well as last season, the lineup is still weak at best. Jake Peavy and Chris Young lead a strong rotation, but they are going to have to pitch near-perfectly every game to give themselves a chance at winning. Once this team falls out of contention, look for Peavy and Young to both be traded to contenders. If someone surprisingly picks up the offensive load, maybe Peavy and Young can carry this team into contention, but I would be surprised to see either on San Diego’s roster at the end of the year.