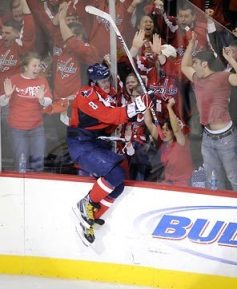 The Stanley Cup Playoffs are in full swing and the next two games feature three great game sevens. That’s right. Three of the four conference semifinals have gone the distance and that is what makes hockey so great. They should all be great, hard fought games and the most-anticipated game is tonight when the Pittsburgh Penguins head back to Washington to face the Capitals.

This one has the making of one of the greatest games in NHL history. This series has been nothing short of phenomenal. I wrote a post a week ago or so saying that for this series to reach its potential, Evgeni Malkin needed to step up and push the Penguins to a game seven. He did more than that as Pittsburgh actually one three straight games and took a 3-2 lead in the series before falling at home in overtime. Now they have to head back to Washington where the crowd will be loud and ready to propel the Caps to victory.

I expect big games from Sidney Crosby and Alexander Ovechkin. This is the biggest game of the year so far and this is when stars come out. I’m not sure they can repeat their matching hat tricks from game two, but I wouldn’t be surprised to see each have multi-goal games as beneath winning the series, there is a competition for the best player in hockey. Don’t forgot Malkin either. He’s fighting for best-player-in-the-league honors as well and he could easily swing the game for the Pens.

In the end though, it may just come down to luck. One good bounce of he puck at beginning of the game and the crowd swings one way or the other. A goal by the Caps and the place erupts while a goal for Pittsburgh would silence the nervous onlookers. That’s all it takes. A bounce of the puck.

That is what makes hockey so great

Besides that star-studded game, there are two other game sevens happening tomorrow night as Carolina visits Boston and Anaheim returns to Detroit. Carolina held a 3 games to 1 series lead against the Bruins, but the Bs have battled back to even the series and carry big momentum into their home arena. Detroit, on the other hand, was leading 3-2, but lost to the pesky Ducks in Anaheim and return home needing a win to keep their chance to repeat alive.

Now for some predictions:

Pittsburgh @ Washington: I’m gonna go with the Caps in this game, because Alexander Ovechkin, momentum, and home ice are tough to beat. However, overtime wouldn’t surprise me at all and the Penguins could easily pull this one out

Carolina @ Boston: The Bruins are hot and Carolina is playing their worst hockey in months. Having won two in a row to even the series with a commanding 4-2 victory last night, the Bruins will feed off their crowd and handle the Canes to advance to the conference finals

Anaheim @ Detroit: A hard-fought affiar will see the Red Wings sneak by with a close victory. The Ducks just won’t go away and I expect nothing less than a gritty, never-say-die perfromance in game seven. However, Detroit has the experience and talent to outplay Anaheim and advance.