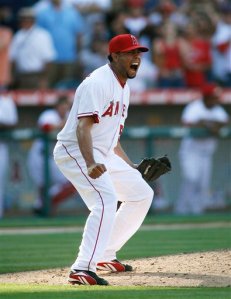 Yesterday the Los Angeles Angels of Anaheim acquired star first baseman Mark Teixeira from the Atlanta Braves for first baseman Casey Kotchman and a minor leaguer. Already possessing the best record in the major leagues, the Angels just got a whole lot better. Their starting pitching is dominant. Ervin Santana, Joe Saunders, and John Lackey may be the best starting pitcher combination in baseball with Jered Weaver and Jon Garland. None of those five starters have an ERA above 4.30, giving the Angels a chance to win every game.

Their bullpen is lights-out. Closer Francisco Rodriguez is on pace to shatter Bobby Thigpen’s record of 57 saves in one season. Relievers Jose Arredondo and Scott Shields both have ERAs of 3.00 or below. Their team ERA is 3.88 and team WHIP is 1.29. The pitching staff is nothing less than superb and it is built for a long run in the postseason. Since only three starters are needed during the playoffs, at least one of Santana, Saunders, and Lackey would be able to pitch in every game END_OF_DOCUMENT_TOKEN_TO_BE_REPLACED 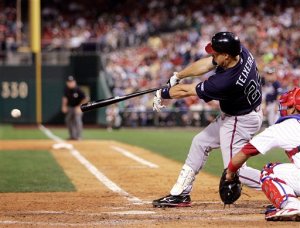 The Major League Baseball Trade Deadline is just two days away and speculation about who is going to be traded to where has taken main stage across the sport. There have already been a couple of minor trades as well as two big ones (C.C. Sabathia and Rich Harden). Harden and Sabathia have already paid huge dividends for the Cubs and Brewers respectively. Though winless in the NL, Harden has struck out 30 batters in 17 1/3 innings, possessing a 1.04ERA. Sabathia is 4-0 with three complete games and a 1.82 ERA. Those were two of the biggest names on the market and the fact that they have already been traded may mean that this year’s Trading Deadline may be uneventful, but anything could happen. Here is a look at a couple of interesting players:

Mark Teixeira: Look who is back on the market. The hottest free agent right now, Teixeira finds himself in an identical situation as last year when he was traded from the Texas Rangers to the Atlanta Braves. This time the Braves are shopping him around. The Diamondbacks seem to be the strongest pursuer of Teixeira, but there are plenty of other offers. The Braves are looking for a big-league bat and a strong pitching prospect for their star first baseman, whose stats speak for themselves (.280 avg, 20 hr, 78 rbi). Arizona is also joined by the Angels, Red Sox, and Rays in pursuit of Teixeira. I think the Braves will move Teixeira and that the offer by the D’backs will trump all other offers Atlanta will receive. END_OF_DOCUMENT_TOKEN_TO_BE_REPLACED

Best Team: Though not completely clear cut, this award goes to the Chicago Cubs who are currently 18 games above .500 and own the best record in MLB, a game and a half ahead of the Los Angeles Angels. They have scored 369 runs, second in Major League Baseball, but the Cubs have allowed the fifth least amount of runs in the entire league at 268. The 101 differential between runs scored and runs allowed is first in baseball and they also have the best ERA in the National League at 3.66. Alfonso Soriano leads the team with 15 home runs and seven of the Cubs’ eight daily batters have averages equal to or above .280. The Cubs possess the best team OPS in National League at .809 and have the third best bullpen ERA at 3.17. Leading in almost ever statistical category, offense or pitching, the Cubs have jumped to the top of league as they hope to win their first championship in 100 years.

Worst Team: One of my favorite awards, the Worst Team Award gives me a chance to look at the most incompetent, hopeless, and pitiful team that Major League Baseball has to offer. Though there are many candidates for this award, the Washington Nationals are most deserving. Though they only have the seventh worst ERA in MLB at 4.56, they have scored the fewest runs out of any team for the entire season at 243. The Nationals have the second lowest OBP (.310) and the lowest OPS (.666).  They have blown 14 saves in 27 opportunities and possess the third highest bullpen ERA at 4.37. All of these stats have combined to make the Nationals 15 games below .500, 6.5 games behind the fourth-placed New York Mets. END_OF_DOCUMENT_TOKEN_TO_BE_REPLACED