The Cleveland Cavaliers dismantled the Atlanta Hawks last night, 99-72, in what will likely be a four-game sweep. This win was impressive on so many levels. Before even getting to LeBron and the steady offense of the Cavs, let’s look at the defense, which is what really wins championships.

Atlanta entered yesterday’s game averaging 87.3 points per game in their first round series. So holding them to 72 points is very impressive, especially considering the Hawks didn’t shoot that badly (28 of 64 – 43.8%). However, the Cavs forced 17 turnovers, including 12 steals. The game was close at halftime at 49-44, but then Cleveland amped up the defense. Atlanta only had 28 points in the entire second half. Wow.

We saw with the Celtics last year that defense wins championships. With Cleveland holding opponents to just 76.8 points per game, they are well on their way to bringing an NBA Championship home.

Now, to the part of the Cavs that really is anyone watches. LeBron James. He just won his first MVP award and continues to prove just how good he is. He played just 34 minutes in the win yesterday and scored 34 easy points. He shot just 20 shots, making 12 of them, and was 8 of 9 from the free throw line. He grabbed 10 rebounds, dished out 3 assists, and had 4 steals. All in a night’s work. Best of all, he made it look easy.

If that’s what he can do in just 34 minutes, think what his stats will be once Cleveland needs him to play a full game. The Cavs can jump on his back, because he can carry them all the way. The man is an unstoppable force that this league has ne 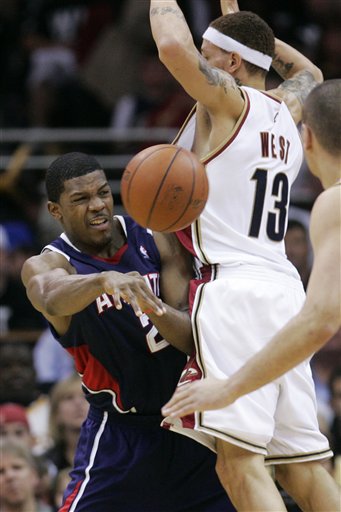 ver seen before. Yes, the league has never seen before. It’s premature to even compare him to Jordan, but just you wait, 10-15 years from now, it won’t even be a debate. King James will own the title of greatest NBA player of all-time. He’s that good.

The Cavaliers scored 99 points on a night where James played just 34 minutes, their big man Zydrunas Ilgauskas mad just two of nine shots and scored only seven points,  and the team had only 16 assists. And yet, they were dominant. The bench is so deep with Joe Smith, Ben Wallace, Daniel Gibson, and Wally Szczerbiack all good enough to start for many other playoff teams. They commit almost no turnovers, just seven last night. Their stars are going to be rested throughout the playoffs; only three players played more than 30 minutes last night and none played more than 40. This team is stacked from top to bottom and no one has any chance at even winning a game against this powerhouse.

One thought on “Can Anyone Stop The Cavs?”