Now that is a soccer game. Andres Iniesta scored in the 93rd minute to send Barcelona into the final of the UEFA Champions League against Manchester United. Down 1-0 entering the final minutes of the match, Barca seemed to be all but dead, but the precise strike from Iniesta changed their fortune and sent Chelsea home shocked.

There were a lot of big calls by the officials during this matchup including the red card on Eric Abidal in the 66th minute and the non-call on a possible hand ball in the 95th minute after Iniesta’s goal. And yet, the right team won in the end. The red card was a terrible call. Abidal did not touch Drogba. It was a complete flop and did not deserve even a foul call whatsoever (well maybe on Drogba for diving). The hand-ball call was a better call. A shot from Michael Ballack struck off Samuel Eto’o’s arm, but it was clearly unintentional as the Eto’o had his back to the ball. Ballack and Chelsea protested profusely, but referee Tom Ovrebo would have none of it.

He called the game and Barcelona walked away with a win.

Barcelona had possession for 71% of the game and attempted more shots than Chelsea did  (14-13), but had just one shot on goal. So Chelsea fans can moan about the calls all they want, but Barcelona deserved the win. They spent almost 30 minutes a man down yet came out ahead. There were some other questionable non-calls inside of the box, but Ovrebo did not call any of them. Except for a possible hand ball on Pique, all were 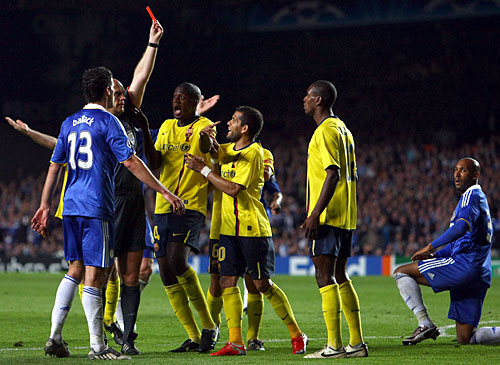 the correct call, and Pique’s hand ball could have gone either way. If Chelsea can’t hold a 1-0 lead up a man at home, then they don’t deserve to win. Don’t blame the ref.

Want to hear the worst part? The referee, Ovrebo, had to be SMUGGLED out of the country. Are you kidding me? Every once in a while you hear about sports going overboard. Here’s another case. There are so many death threats and Chelsea police have determined them so real that the police changed his hotel. Chelsea should be embarassed by their fans. It’s disgraceful and disgusting. Who in the world wants to be a soccer referee? If he had called the penalty, then I’m sure he would have received death threats from Barcelona fans. It’s a lose-lose situation. No matter what his life is on the line, and for what? A soccer game. Sports can be incredibly competitive and intense, with tons of money riding on individual outcomes, but a person’s life? Come on, that’s simply absurd.

One thought on “Barca Tops Chelsea In Thriller”