Manny’s steroid use opens up a whole new box of questions, but the biggest one of all deals with a team he’s not on and season five years ago:

Is the 2004 Championship (and 2007 for that matter) he won with the Boston Red Sox tainted? 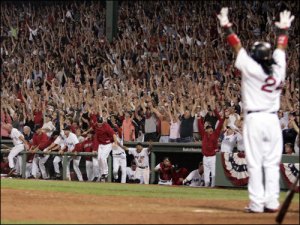 That’s all pretty straight forward. So far, no player’s steroid use has caused anyone to doubt a team’s success. Keyword: team. Teams win. Players just make up a team and Manny was one player. This shouldn’t even be a debate: The 2004 Boston Red Sox were, are, and forever will be champions.