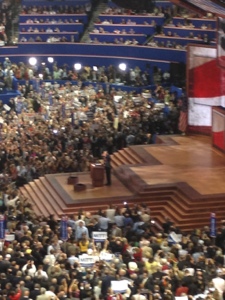 Romney speaks at the RNC.

The Republican National Convention wrapped up last night with Mitt Romney giving the keynote address and Clint Eastwood adding the…um entertainment. I was not able to attend the first night, but last night was certainly much more exciting and interesting than the previous evening.

The reason? The night wasn’t full of politicians. It was full of people who knew Romney personally. Ted & Pat Oparowsky spoke about the care and compassion Romney showed their family, and in particular, their son, who was diagnosed with cancer at just 14 years old. Next, Pam Finlayson gave a moving speech about her daughter, who was born three and a half months premature and died just over a year ago at the age of 26. She told the quiet crowd how Romney had frequently cared for her two-year-son while her daughter was in the hospital and when she was unable to prepare a Thanksgiving meal, the Romneys stepped right in and showed up at her door, meal in hand.

The crowd was silent during these great speeches and many were wiping tears off their cheeks after them.

A number of other individuals – from Romney’s days as a pastor, his time at Bain and his term as Massachusetts governor – gave a tremendous picture of Romney as a smart, caring man.

Then, just before the networks cut in, a video played throughout the arena about the Romney family and Mitt’s parents. It had numerous old family photos and videos from Mitt’s father, George Romney. It had interviews with the Mitt’s sons, about how they always used to cause trouble as a kid and they would never go to their dad to ask for money (always their mother).The video was nothing short of adorable.

Then prime time came and out walked Clint Eastwood to a huge ovation. Then Clint Eastwood spent the majority of his speech talking to a chair (with an invisible Obama in it of course). I don’t think it was disrespectful but it was incredibly strange. From inside the arena, it felt weird. When I re-watched in on TV later, it was even weirder. I really cannot figure this one out. Eastwood had no teleprompter or notes. He went on stage and said what he wanted to – and it showed.

The empty chair routine was certainly awkward. I’m not sure why anyone at the RNC approved of the idea (or let Eastwood sneak a chair onstage). But it was a huge missed opportunity. The Oparowsky’s story, Pam Finlayson’s moving speech or the video of Romney’s family would have been perfect to humanize Mitt and show a complete different side of him to a huge audience.

Instead, the world saw an 82-year-old Clint Eastwood talk to a chair. It was a huge mistake.

As for Romney’s speech itself, it was solid and effective. But it was not a game changer. It was policy-light, rhetoric-strong. His top lines of the night were certainly:

If you felt that excitement when you voted for Barack Obama, shouldn’t you feel that way now that he’s President Obama? You know there’s something wrong with the kind of job he’s done as president when the best feeling you had was the day you voted for him.

I wish President Obama had succeeded because I want America to succeed.

Romney was mostly his strong, confident self for most of the speech. He grew a bit emotional when talking about his parents but quickly transitioned to his time as Governor.

Overall, Romney was exactly who we know him to be: a presidential-looking, confident man that just cannot seem to connect to the average person.

That’s what makes the inclusion of Eastwood and the exclusion of the humanizing videos and speeches about Mitt such a huge missed opportunity. Those stories could have helped him connect with the average voter more than any speech could. But the millions of viewers in prime time didn’t get to see them and that may go down as one of the biggest mistakes of this election.

2 thoughts on “A Missed Opportunity”